LOS ANGELES -- The USC Trojans (5-1) rebounded from its first loss of the season as they cruised to a 38-10 victory over the Oregon State Beavers (1-5), Saturday afternoon at the Los Angeles Memorial Coliseum. 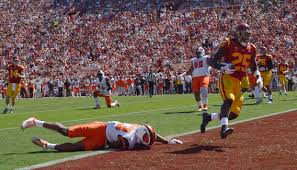 Although the final margin of victory equaled four touchdowns, the home team did not look impressive on offense while getting the win. Sam Darnold threw for 316 yards and three touchdowns but the team left some points on the field. The Trojan's Heisman-hopeful quarterback was marred by some sloppy ball handling on the day, as he threw one interception and fumbled twice.

On Oregon State's first drive, USC defensive back Jack Jones intercepted a pass from Darell Garretson on the Beaver's 32 yard line, which gave the home team a short field. The Trojans took advantage of that short field, as Ronald Jones scored a touchdown on a four-yard carry. Jones has now scored a touchdown, either rushing or receiving, in last 12 games. Jones finished the game with 79 yards on 12 carries.

After the Trojan defense held the Beavers to a 3 and out, then forced them to punt on the next possession, USC's Ajene Harris muffed the punt at his own 29 yard line, giving the Beavers the ball in scoring position. However, the Trojan defense, once again, held its ground and didn't give up a yard. On fourth down, a 47 yard field goal attempt was blocked by the tandem of Jack Jones and Kenny Bigelow Jr.

On the ensuing possession, the football slipped out of Darnold's hands for a fumble recovered by OSU in prime scoring position. Just as they had before, the Trojans defense prevented a first down. The Beavers attempted a 37 yard field goal but missed it wide left.

The Beavers scored three points to open the second quarter. The Trojans then marched 77 yards down the field. The drive was aided by a roughing the kicker penalty, which the Trojans capitalized on by throwing a 16 yard touchdown pass to Deontay Burnett to extend its lead to 21-3.

This game was a testament to just how good the USC defense is. The Beavers moved through the gridiron where they went for it on 4th and 2 at USC 15 but was stopped just short of the down marker.

As USC appeared to be headed toward the end zone, Darnold turned the ball over again as he misread Beaver linebacker Manase Hungalu's coverage and his pass was intercepted.

USC went into the halftime break with an 18-point lead.

The Trojan's most impressive offensive drive came on their opening possession of the second half. USC started with the ball on its own nine yard line and took 91 yards down the field for a score. A fourth down conversion was the key play of drive. Darnold completed a pass to Steven Mitchell Jr. for eight yards to the Oregon State 30. From there, Darnold threw a 30-yard touchdown pass to Josh Falo to put them up 28-3. It was Falo's first career reception.

With the game out of hand, USC head coach Clay Helton got some of his lesser used players some game action. Freshman quarterback Matt Fink made the most of his first collegiate appearance when he kept the ball on a read option and raced down the sideline for a 51-yard score.

After the game coach Helton pointed out that getting players like Fink and Falo game action as the silver lining in this matchup. 13 different players had a reception for the Trojans on Saturday afternoon.

The Trojans have a tough conference matchup against Utah (4-1) next Saturday night.

Posted by Darrel Wilson at 11:04 PM No comments: