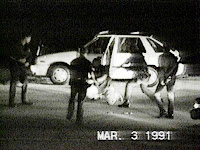 See, what had happened was… On this day in history (April 29, 1992), a trial jury acquitted four Los Angeles Police Department officers of assault and use of excessive force on Rodney King, RIP. This event jump started the LA riots. Still, to this day it seems that we can’t all get along.  Now on to sports... This news didn't happen last week but I needed to include the biggest story of the sports world so far this year, it couldn't wait until my next posting.  On Monday morning April 29th, Sports illustrated released a self written article about Jason Collins. Collins became the first active athlete in a major American sport to announce that he’s gay...
Read more »
Posted by Darrel Wilson at 2:51 PM No comments:

I realize complex analysis and weird view points can get boring sometimes. So I'm gonna dedicate one blog entry every week to be filled with random thoughts on various topics of recent happenings. I'm also gonna speak on things that I think might happen, most people call this a prediction but I won't because I don't feel like being all technical and accountable in this particular piece.  I would hate if someone would referencing an off the top opinion piece and hold it against me. I'm sure it'll happen regardless but whatever, this is just for fun. Expect me to drift way off topic write about my other love, hip hop music, there's nothing like it. So anyway...

Read more »
Posted by Darrel Wilson at 12:23 PM No comments:

NBA Most Improved Player... Who Really Deserves This?

Okay, I want to state for the record that this is the most ridiculous of the post-season awards handed out by the National Basketball Association.  There really isn’t a set standard or a defined checklist to go by to weigh how some players have improved their game versus others that have gotten better.  However, since the association wants to keep this award in place, I might as well give my seven cents on it.  I’ll break guys into three different groups.

NBA Sixth Man Of the Year

A substitute, replacement, back-up, relief… these are some of the labels that are given to the players that aren’t included in the starting lineup in sports.  In basketball, this collective not included in the starting five is known as “the bench”.  It’s a fact that the level of contributions from the bench makes the difference between franchises that are just being mediocre from those that are bona fide contenders.  A special designation though is usually reserved for the first player to check into the game, the sixth man. The sixth man can simply be the best of the group that’s not worth enough to be starters or he can very well be good enough to start but the coaching staff feels he can more of an impact coming off the bench.  Enough of the basics let me get to the point.  I feel the person that wins Sixth Man Of the Year should be someone that’s indispensable to his organization, an integral part of its success and comes from a top tier team.  Therefore my winner is going to fall into that criterion.

NBA Rookie Of the Year

The narrative gets pretty boring when it appears there is only one reasonable answer, so I’ll try to enlighten you because this race turned out to be interesting.  November wasn't even over and a clear cut leader of the pack had already emerged.  Most people predicted the likes of Anthony Davis, Harrison Barnes, or Michael Robinson.  However, the kid that would receive the early raves and end up winning this thing was completely under the radar. Before I discuss the winner let me talk about some other newcomers that deserve praise.

NBA Defensive Player Of the Year

I’m motivated to make a contribution to the pointless arguments that go on over the internet. So hey, why not just do it on my own site. The NBA season is nearing its conclusion, thankfully this means I have a few “gimme” topics to write about.

Dwight Howard - The guy that has been a shoe in for this award for the better part of his career made strong push for this award towards the end of the season. His defense post All Star break has been stellar and, other than Kobe Bryant’s Space Jam level offense, has been the driving force behind the Los Angeles Lakers’ playoff push.  Howard also leads the NBA in rebounding.  Unfortunately for D12 and the Lakers, his efforts weren't enough, the team was altogether pretty horrible on defense.   He came into the season still recovering from off season back surgery. The poor shadow of himself that suited up in the first half of the season wasn’t the intimidating presence in the paint that we all were used to.