NBA Sixth Man Of the Year

A substitute, replacement, back-up, relief… these are some of the labels that are given to the players that aren’t included in the starting lineup in sports.  In basketball, this collective not included in the starting five is known as “the bench”.  It’s a fact that the level of contributions from the bench makes the difference between franchises that are just being mediocre from those that are bona fide contenders.  A special designation though is usually reserved for the first player to check into the game, the sixth man. The sixth man can simply be the best of the group that’s not worth enough to be starters or he can very well be good enough to start but the coaching staff feels he can more of an impact coming off the bench.  Enough of the basics let me get to the point.  I feel the person that wins Sixth Man Of the Year should be someone that’s indispensable to his organization, an integral part of its success and comes from a top tier team.  Therefore my winner is going to fall into that criterion.

Kevin Martin - This is the guy who is actually is the replacement for the reigning top replacement.  Oklahoma City has a team where two of the best players in the league dominate the scoring.  Durant and Westbrook can’t do it all by themselves however.  When times are hard and they need relief, they go shopping at K-Mart to get the buckets (womp womp).  James Harden was a hard act to follow but Martin, who’s always had a reputation as a very efficient scorer, filled in admirably; scoring 14 points per while shooting 42% from the land of threes.  Many experts questioned the Thunder’s brass when they made the off-season Harden for Martin switch, but as evident by their number one seed in the west, they knew what they were doing all along.

Javale McGee - I’m not exaggerating when I say Javale is probably the most athletic player in the NBA today. Big men don’t normally get recognition for their jumping ability because they make dunking and shot blocking appear that it takes minimal effort.  As a hoop purist, I felt compelled to acknowledge him because mainstream media only likes give shine to the sexy offensive side.  Javale is an expert at erasing shots at the rim and igniting the transition.  At only 18 minutes per game, Javale McGee is a key reason for Denver’s turnaround.  This season, they have an added defensive element to their play and that’s why it is arguably the most successful in the history of their organization.

Jarrett Jack - For many people, Jack is recipient of this award.  It’s not hard to understand why he gets the support.  He provided the type of veteran leadership that a young team, that Golden State is, needed to rack up the wins.  He possesses the same type of hard nose mentality that his head coach, Mark Jackson, did when he was playing. Jack is the floor general, even when he’s on the court at the same time with starting point guard Stephen Curry. He’s entrusted in late game situations to set up the plays. It’s not about who starts but finishes. The Warriors aren’t a top tier team but they surely wouldn’t be in the playoffs with Mr. Jack. 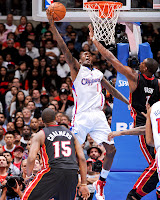 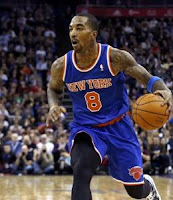 J.R. Smith & Jamal Crawford - We can’t go wrong at all with either Jamal Crawford or J.R. Smith, so why not have a tie?  This certainly won’t be the first time in the history of NBA post season awards that there has been a tie.  Both of these guys truly deserve to be sixth man of the year.  Smith, the best sixth man in the Eastern Conference has carried the Knicks by himself at times when Melo couldn’t produce and averaged 18 points coming off the bench.  Crawford, the best sixth man in the Western Conference did the majority of his damage when scoring was needed late in the game; he finished in the top 5 in the league in fourth quarter scoring while averaging 16 a game.  You might say “if Smith scored more, then why is there a tie.” The Knicks had nobody outside of Melo to put buckets in the hoop, resulting in Smith playing more minutes than most starters in the NBA. Crawford was a more efficient scorer, shooting at a better percentage from everywhere and struck fear in opponents any time he touched the ball.  The Clippers depth is the main reason for them winning their first ever division title and having their best season ever.  Crawford detractors will point to his lack of defense but he only filled the role that was asked of him, their bench was filled with defensive specialists.  So instead of arguing over which one of these guys should top this list, let’s celebrate the fact that we’ve enjoyed both of their season performances and both have helped  put their respective teams in a position to legitimately contend for a title.

Posted by Darrel Wilson at 3:46 PM