LOS ANGELES -- To excel in athletics, one has to have a short memory to forget about the negative that just occurred and focus on what needs to be done next to prevail in competition. This is exactly what Chimezie Metu did as he teamed up with Jordan McLaughlin on the game winning play in the USC Trojans 72-70 win over the Oregon Ducks Thursday night at the Galen Center. 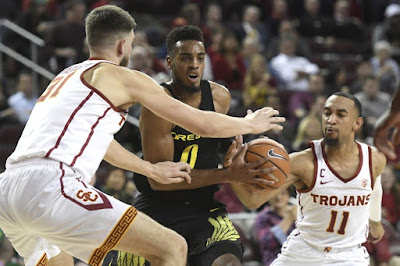 Just moments before the final buzzer sounded, Metu was at the free throw line with the opportunity to increase a two-point lead and possibly ice the game but he missed both free throws.

The win improves USC's record to 9-5 in Pac-12 play, which is good for second place in conference, and 19-9 overall.

"This was a huge win for us because we need every game down the stretch," said a jubilant Andy Enfield, after the game. "We have four games left. We have to hold our home court advantage. Right now, we are 6-1 at home. We have to focus on Saturday night and play with the same kind of energy."

With the game knotted at 70, McLaughlin was double-teamed on the right side of the floor as clock was ticking toward zero, he then found Metu cutting to the rim and tossed the ball up for a game-winning, redeeming alley oop layup.

"I'm always aware of the clock," said McLaughlin. "Coach wanted us to run it at six seconds. So, coming off the ball screen, I dragged it. Took a couple of dribbles and threw the lob."

Early on, Oregon looked like they were going to run away with the game as they jumped out to a seven-point lead, midway through the opening half. However, the Trojans weathered the storm as Metu scored five quick points out of a timeout to right the ship.

Chimezie Metu led the Trojans with 10 points at the half and no other player having more than six. Jordan McLaughlin, a Cousy Award finalist, dished out five assists in the first half.

There were four lead changes in the first half compared to 11 in the second. Oregon led by one, 29-28 at the break. The bulk of the Ducks points were produced by Payton Pritchard and Mikyle McIntosh with 10 each at halftime. McIntosh finished with 23 and Pritchard scored 17.

Both teams scored at a higher efficiency in the second half as they each surpassed their first half scoring output, 12 minutes into the half. Especially McIntosh, who came out of the break hot and continued getting buckets, as he scored the Ducks' first five points of the second half.

Not to be overlooked is the production the Trojans got from Jonah Mathews, who soon joined the party as he quickly drained two from behind the arc to help the home team keep pace right after halftime. He scored 14 of his team-leading 20 points in the latter stanza; Mathews made five three-pointers in the game.

"We decided to put him back in the starting lineup because he had been playing so well lately," said Enfield about Mathews. "He just played terrific."

Both Metu and McLaughlin produced double-doubles on the night; Metu with 18 points and 10 boards, McLaughlin with 11 points and the same amount of assists to match.

The game might have had a different outcome if not for Elijah Stewart secured an offensive rebound with the Trojans trailing 67-68 with 1:38 left on the clock. Later in that possession, Stewart received a pass from Metu in the left corner and nailed a three to give the Trojans a 70-68 lead with a minute and a half remaining. The stage was then set for the closing act.

Former Trojan and NBA All-Star Demar Derozan, who is in town for the NBA All-Star Game visited with the young Trojans before the game and gave a few words of encouragement.

Bennie Boatwright went down with a leg injury at the 7:57 mark. Coach Enfield said he would be evaluated Friday morning.

Posted by Darrel Wilson at 11:33 PM No comments: