LOS ANGELES -- The Western Kentucky Hilltoppers pounded the ball inside to Justin Johnson, 23 points, early and got buckets from him late as they defeated the USC Trojans 79-75 in the second round of the National Invitation Tournament, Monday night at the Galen Center, ending its season. 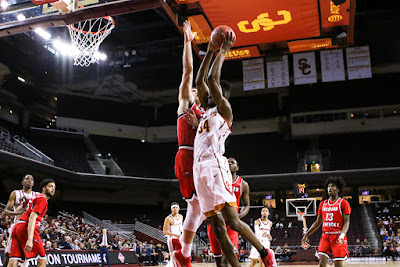 Proving the NCAA Tournament selection committee wrong would turn out to be a tougher task than expected when leading scorer and rebounder Chimezie Metu, who chose not to play in the NIT to stay healthy for NBA draft preparations.

Metu cheered his team on from the stands. After the game USC's head coach Andy Enfield said the administration made the decision that Metu was not allowed to sit on the bench with the team since he was eligible and not injured but made the decision not to play. Freshman Victor Uyaelunmo got the start in place of Metu. Uyaelunmo opened the scoring with an easy dunk but didn't do much else.

"We much rather had him in than the other big guy [Metu] who was starting," said Stansbury.

The 2018 version NIT is experimenting with four rules modifications. First is the three-point line extended 20 inches to beyond 22 feet. The second is the free throw lane widened from 12 to 16 feet. Third, the game will be divided into four 10-minute quarters instead of 20 minute halves. Lastly, the shot clock resets to 20 seconds after an offensive rebound, opposed to the full 30.

Extending the three point line may have had a direct impact on the game's outcome. In the final minute, with the Trojans down by two points, Jordan Usher shot an airball from the right wing.

"The guy that we were going to take a chance on was Usher. And he jumped up and didn't make the shot. You have to roll with your percentages and we were lucky to get out of here with the W."

After Usher airballed with 24 seconds left, the Trojans, inexplicably, failed to foul Western Kentucky to extend the game. Instead the Hilltoppers broke an attempted trap for an easy dunk to seal the ball game.

The game was essentially decided at the free throw line. Western Kentucky made 16 of 17 from the charity stripe while USC made only eight of 19. According to Stansbury, this has been the Hilltoppers M.O. all season as his team has made more free throws than its opponents have attempted this year.

The Trojans held the lead for most of the game. Powered by Elijah Stewart's 10 points, including two from beyond the extended arc, USC led 23-18 at the end of the first quarter. Johnson, the Hill Toppers' leading scorer and rebounder on the season, scored 10 of his team's 18 points in the first quarter.

"We were much more efficient around the rim. I didn't do a good job of taking more advantage, using Justin tonight," said Stansbury.

The second quarter played out much different than the first, as the Hill Toppers tightened up on defense, forcing the Trojans to take contested jumpers. On the offensive side of the ball, Jake Ohmer ignited visitors by draining two deep threes early in the second quarter. The halftime score was 40-39 in favor of the Hilltoppers.

The Hilltoppers looked like they were going to pull away in the third when their lead was stretched to seven points with 1:43 left in the quarter. However, USC ended the quarter on an 8-2 run that featured Stewart catching a lob from McLaughlin, bringing the crowd to its feet and hitting a three to end quarter. Trojans still trailed by one to end the quarter.

Posted by Darrel Wilson at 11:00 PM No comments:

LOS ANGELES -- Aaron Holiday and Kris Wilkes combined for 56 points to lead the way for the UCLA Bruins in an 83-72 win over cross-town rival USC Trojans, Saturday night at the Galen Center. 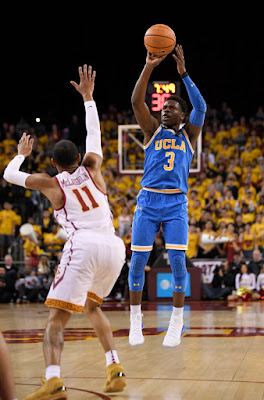 The Bruins used an 18-3 run, midway through the second half, to come from behind and seize control of the game. Holiday scored nine points out of the first 11 during that crucial run. UCLA never looked back after that.

"Tough game for us this evening, UCLA played extremely well offensively," said USC head coach Andy Enfield. "Give them credit. They made shot after shot during that run when they took the lead. We had trouble stopping them."

This was the final regular season home game for the Trojans and it was also Senior Night, as the four-year players for USC were celebrated in a ceremony prior to the game. One of those seniors, Pac-12 assists leader and Bob Cousy Award Finalist Jordan McLaughlin, went in his bag early in the game and set the tone by scoring seven of USC's first 11 points. The Trojans just couldn't hold on.

The Bruins, who badly needed this win to upgrade their resume for an at-large bid to the upcoming NCAA tournament, had intentions of making sure the only Trojan celebrations took place before the game, especially the conference leading scorer -- Holiday.

"We're the point guards of our teams, leading our teams," said McLaughlin, who had a team-high 19 points and four assists. "Tonight we did a good job of that... and he [Holiday] won the battle.

The Trojans led most of the way and held a 43-40 lead at halftime. USC featured a balanced scoring attack in the first half, with all eight players who entered the game scratching the score sheet. Chimezie Metu finished with 16 points and 10 rebounds.

UCLA's deficit at the half could have been much larger if Bruin freshman forward Wilkes didn't score 15 of his career high 22 points in the first half. Wilkes shot six of eight while draining three threes in the process. Holiday scored 14 in the first half and 20 in the second.

Discussion after the game quickly turned to the Pac-12 tournament, leading into selection Sunday for the NCAA tournament. Even with the loss, USC finished second in the conference. In years past, this would be good enough for a ticket to the dance but Arizona is the only ranked team in the conference.

USC senior guard Elijah Stewart had the sentiment that it doesn't matter occurred in the regular season because each of the conference's teams are vulnerable in tournament play. Coach Enfield wants his team to focus on one game at a time because nobody knows what the criteria is for making the tournament.

"We have a big week ahead of us," said Enfield. "We have some very good wins... Sometimes common sense has to prevail."

Posted by Darrel Wilson at 12:30 AM No comments: