NBA Rookie Of the Year

The narrative gets pretty boring when it appears there is only one reasonable answer, so I’ll try to enlighten you because this race turned out to be interesting.  November wasn't even over and a clear cut leader of the pack had already emerged.  Most people predicted the likes of Anthony Davis, Harrison Barnes, or Michael Robinson.  However, the kid that would receive the early raves and end up winning this thing was completely under the radar. Before I discuss the winner let me talk about some other newcomers that deserve praise.

Bradley Beal - This youngster has all the tools to be great in this league. He has a pretty shooting stroke, is a solid defender, and has shown the ability to make plays for his teammates. John Wall started the season on the injured list, and it was the rookie Beal that the Wizards leaned heavily on above the veterans.  That’s a lot of pressure for a rookie.  Due to his early struggle, many analysts and fans were unjustifiably throwing out that “B” word that nobody wants to be labeled as. Wall’s return relieved Beal of the responsibilities given and allowed him to fall back into a more comfortable supporting role.  You can then see him excel at the things he is best at, making the nets swish from long range.

Anthony Davis The number 1 pick of the 2012 NBA draft was most people’s favorite to become this year’s ROY.  Sadly, an early season injury derailed his campaign before it started.  That said, “The brow” performed well and showed flashes of the monster most thinks he’ll become in the future and earned the right to be at the top of this discussion.  He was leader among rookies in blocked shots and rebounding, these are just the numbers that an average fanalyst like me can understand.  Looking through the eyes of the growing legion of stat nerds, Davis would win this prize without any debate.  According to advanced metrics, Davis excelled in the most important categories; PER (21.8) and Win Share average (.159).  Now I’m not smart enough to decipher what those numbers mean, all I know is that if a person is the leader in anything positive, he must have been damn good.  Anybody that says “Anthony Davis doesn’t deserve to be considered” is a plain idiot.  What most casual fans aren’t aware of is that Davis played guard most of his life, he underwent a 9 inch growth spurt from the beginning of his high school sophomore season until he was touted as the top recruit in the middle of his senior season.  I’m saying this to point out how remarkable I think it is for him to perform like he is while still learning how to play his position. Some hard work in the weight room can turn this man into a true David Robinson/Hakeem Olajuwon cross breed. 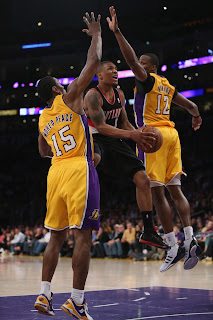 Damian Lillard - Thankfully, the game of basketball that we love is played on the hardwood by real people and not by computers.  Big Time colleges overlooked the kid from Oakland, so he took his talents to the Big Sky conference and got his shine on in the boondocks.  At a mature age of 22 and after playing all four years at Weber State, Damian Lilliard started his professional career NBA ready. The rap sheet on him questioned if he can actually play point guard in this league or if he was just another undersized shooting guard that got fat off of weak competition in a small conference.  They no longer needed to ask questions after he ripped the Lakers apart in his professional debut, scoring 23 points and dropping 11 dimes en route to a season opening win.  There are different types of point guards in today’s NBA, in my opinion, you can’t even be considered mid tier unless you average at least 6 assists per game. Lillard is already there and will improve as the team around him does.  He also leads the league in total minutes played.  More importantly, he took over the reins of a team that already has an All-Star in LaMarcus Aldridge.  These are some pretty impressive accomplishments for a player, even more that it’s a rookie. I salute you Damian Lillard