I realize complex analysis and weird view points can get boring sometimes. So I'm gonna dedicate one blog entry every week to be filled with random thoughts on various topics of recent happenings. I'm also gonna speak on things that I think might happen, most people call this a prediction but I won't because I don't feel like being all technical and accountable in this particular piece.  I would hate if someone would referencing an off the top opinion piece and hold it against me. I'm sure it'll happen regardless but whatever, this is just for fun. Expect me to drift way off topic write about my other love, hip hop music, there's nothing like it. So anyway... 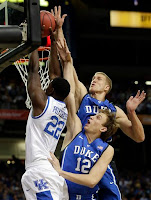 See, what had happened was... one of my Twitter followers, knowing I'm a huge Kentucky fan, tweeted me talking about how "Alex Poythress is getting lost in the mix for next year it seems, especially if Wiggins commits. Should have left and took his chances like Archie Goodwin." What I say to that is that Alex probably made the right choice. No top recruit should even have the mentality of entering college thinking about being one and done. They need to concentrate on maximizing and improving their skills during the year, with winning a championship as the end goal. If their game is good enough, the scouts will be making noise. Poythress came into last season, like the rest of his teammates, thinking rave reviews and winning was a foregone conclusion. He knows there's a new batch of players (all ranked at the top of their position) coming in and is working on his game to keep a starting spot, he's been apart of the AAU circuit and knows what these guys are bringing to the table.  It'll surprise me if he isn't the man leading BBN on their quest for number 9...


Speaking of AAU, I was reading something on ESPN Insider that disappointed me. I know most people don't pay for that service so I'll be kind enough to leave you with an excerpt:


"Chris Paul’s AAU team, CP3, is in Los Angeles this weekend for the Nike EYBL competition. To say Paul is involved with his team doesn’t do his commitment justice. He goes to games, gets involved in the kids’ lives and mentors the players. We need more guys like him in AAU.  Paul invited his team to his home in L.A. and planned on taking the players to an L.A. Clippers practice. But according to Paul, the NBA said no dice and told him there would be consequences if he did this"

It doesn't surprise me that a scumbag institution like the NCAA would disallow this but for the NBA to step in just fuels the anger that I have for David Stern. Chris Paul just wanted to provide something positive that is rarely offered to youngsters. It is truly a shame...

The NBA playoffs kicked off this past weekend. I had a conversation with a pretty cool blogger and asked for thoughts on possible first round upsets, clearly I was alluding to the Lakers chances of advancing past San Antonio, which he replied "nah, I don't see any upsets happening." I have faith in the Lake Show and think it's a possibility albeit a VERY slim one. What ails them is their lack of focus and will to fight on the road. Most teams show these symptoms but the real contenders will get theirs as we'll see later this week, but opening weekend saw all the top seed hold serve going 8-0. Here's the smalls...

Boston helped New York beat them by only scoring 8 points in the 4th quarter. Melo got off early, then got cold, but with the help of newly crowned 6th Man Of the Year JR Smith, the Knicks finished strong and earned a grimy Win.  All bs aside, that was truly an impressive defensive performance in the 4th though. Those cats in South Beach are the team to beat but NY can give them a run for their money playing that kind of Defense...

The Golden State vs Denver game was what everybody hoped for.  Back and forth action featuring one team that loves jumpers and another that lives in the paint. Stephen Curry shined with late heroics, but in the end it was Andre Miller who stole the spotlight with a game winning drive as the Nuggets won by 2.  Adding injury to the insult for the Warriors, their All-Star David Lee will miss rest of playoffs with a hip injury...


I knew Brooklyn vs Chicago was gonna be whack so watched the Nike Hoops Summit instead, can't even front like I know what really happened...

San Antonio defeated the Lakers, with the difference in the game being turnovers leading to free points.  The talking point after the game however, was about Kobe live tweeting during the game. It's interesting to me because I feel if coach D'Antoni was able to read them and try to do what coach Bryant was saying, his team would have had a better chance of winning. Anyway...

The Indiana Pacers, lead by Paul George's triple double, got their playoff run to a good start with win over Atlanta.  Hawks' players complained about only shooting 14 free throws, while George made more than they shot by himself connecting on 17 of 18 from the charity...

Brandon Jennings predicted a six-game series win for his Milwaukee Bucks over Miami, too bad for him the rest of the team didn't fall in line and ball on his level. The Heat did what was expected of them, yawn...

Oklahoma City Thunder just ran through Houston in a laugher. Russell Westbrook made it look like the Rockets were playing defense with roller skates on...

The Clippers and Memphis played a competitive first half but it was evident that LA controlled the tempo.  In the 2nd half the Clippers, lead by Eric Bledsoe and the bench, took charge and ran roughshod past the Grizzlies...

It might be too early to talk about player movements for next season but CP3 is already discussing how Eric Bledsoe might be playing elsewhere. Bledsoe has one year left on his rookie deal and the Clippers are expected to max out Paul this summer. I'll dwell on this for a little because I feel like showing some Big Blue Nation love (I'm partial to all things Kentucky Basketball).  I feel Bledsoe is the best young point guard not starting in the NBA right now. When CP3 went out for a spell with injury this season, it appeared the team fell apart with Bledsoe starting at the point. I blame coach Vinny Del Negro for taking the ball out of his hands and making Grant Hill and Jamal Crawford run the offense. Most guys need to get into the mind set that they're in charge instead of just being thrust into that role...

I hope you enjoyed and come back for another read next week.