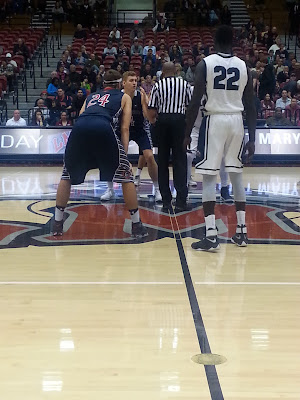 LOS ANGELES -- The Loyola Marymount University Lions (7-5) were outlasted by the Saint Mary’s Gaels (11-1) 72-60, as opened West Coast Conference play on their home court on Thursday night at Gersten Pavilion.

The Aussie combo of Emmett Naar and Jock Landale led the way for the Gaels, whom had four players score in double figures. Landale, who was a physical presence on the inside, notched 18 points and 11 rebounds. Naar made big shots every time the Lions made a run.

The Lions were looking for an upset against the 19th-ranked Gaels. There were some moments in the game when it appeared it could be a possibility.  Particularly midway through the second half when the home team used a furious 11-2 run bring the score to a one-point deficit at 42-41 but Naar calmly drained a three to hush the home crowd.

After the game, Saint Mary’s Head Coach Randy Bennett said he was excited to walk away with a win.

“That game could have gone a lot of different ways,” said Bennett “Fortunately, [Naar] hit that three, which got us a little separation. We got a stop and got it to six, and then we kept it. It’s that simple sometimes.”

LMU used an early 7-0 run to strike fear into Saint Mary's and hold a 12-8 lead, but the visitors then immediately settled in by responding with a 10-0 run of its own to seize momentum.

However, the resiliency of the Lions prevented the Gaels from pulling away. LMU controlled the game’s tempo by being deliberate when in possession but failed to put the ball through the hoop, shooting only 35 percent, in the first half compared to 57 percent for Saint Mary’s. The hot shooting gave the visitors a 34-25 halftime lead.

Fresh out of the locker room, LMU turned up the defensive pressure to try to force turnovers but that didn’t work in its favor as they were called for 17 fouls in the latter half with four LMU players fouling out. Saint Mary’s shot 33 free throws in the game to LMU’s 17.

“I look at a foul as a mistake,” said LMU Head Coach Mike Dunlap. “If we can eliminate that disparity, we’ll have a hell of a chance of winning quite a few games.”

Landale, the Gaels’ leading scorer on the season, asserted himself in the second half by making five of seven field goals in that period. His key basket came just past the 10-minute mark, when he scored over Stefan Jovanovich and forced him to commit his fifth foul, which disqualified him from the game.

“They were playing tough defense,” said Landale. “It took us away from things we wanted to do. We just had to counter their physicality.”

Mid-season transfer Trevor Manuel led the Lions in scoring with 18 points on the night. The Lions next host BYU in a New Year’s Eve matinee.
Posted by Darrel Wilson at 11:30 PM