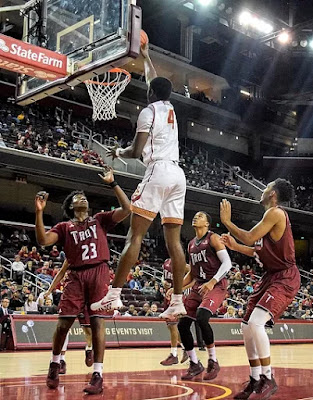 USC Rallies in Win Over Troy to Stay Perfect

LOS ANGELES -- The University of Southern California Trojans used a late-game rally to defeat the Troy University Trojans 82-77 Saturday night at the Galen Center. This was the fifth game of the season USC that had to come back from a deficit of nine points or more to win.

Junior guard Jordan McLaughlin and sophomore forward Chimezie Metu provided the key offensive plays for USC down the stretch. Down 77-74 with close to a minute remaining in the game, Metu caught a post-entry pass and scored a turnaround jumper. Troy subsequently turned the ball over on an inbound violation and Metu drew a foul shortly after USC began its possession. Metu sank the first free throw to tie the game but missed the second.

Luckily for USC, Metu’s missed free throw caromed into the hands of Elijah Stewart, which set the stage for the game-winning basket. McLaughlin, with the ball at the top of the arch, received a screen and drove down the left side of paint and laid the ball off the glass over two Troy defenders to give USC a 79-77 lead with 41 seconds to go.

“We called their number and they made plays,” said Enfield. “I called a lot down the stretch for Chimezie. He got it going down in the post and kept scoring… We give Jordan a lot of freedom… he’s playing at such a high level right now… I’ll take him over any point guard in the country.”

The home team certainly wasn’t in the clear as Troy had been responding to rallies all game. Troy’s sophomore guard Jordan Varnado found his way to the rim but his layup was blocked by Stewart, Varnado retrieved the ball and tried to score again but his shot was emphatically blocked by an elevated De’Anthony Melton with 14 seconds left. USC gained possession and McLaughlin was sent to the free throw line, where he sank both shots and iced the game.

“We defended down the stretch when we had to and were fortunate to win,” said Enfield. “Troy outplayed us for a long time because they made tough shots… We had a tough time stopping them for most of the game.”

Coming into the game USC was off to its best start since they won their first 16 games in 1971.  Early in the game, USC looked lethargic and appeared they would be hard pressed to win as Troy jumped out to an early nine-point lead and seized control of the game. Junior guard Wesley Person was key for Troy as he made his first three three-point attempts and scored 10 of Troy’s first 15 points and 15, overall, in the first half.

“We switched all the ball screens and they were making 25 footers,” said Enfield. “Instead of driving on bigs like most teams do, they stepped back to shoot long threes, and were making them. They made eight in the first half.

USC made a surge in the final minutes of the first half. Sophomore guard Shaqquan Aaron took a missed shot and went coast to coast to tie the game at 29. A tip in by freshman big man Nick Rakocevic gave USC a 31-29 lead, its first since being up 4-3. Teams would trade baskets the rest of the first half culminating with Troy’s Jeremy Hollimon draining a three with two seconds left to put Troy up 40-38 at halftime.

Troy opened the second half with 10-2 run to with a 10-point lead and regain control of the game, very similar to what the flow was in the first half. The home team would be forced to rally again if they wanted to get a win.

Things began to turn around for USC as they improved play after trailing 51-60 at the 12-minute media timeout. Powered by its defense, the home team slowly crept back into the game. A powerful dunk by Metu, who was found running through the lane by Melton, cut the deficit to 66-65. Melton led USC with five assists off the bench.

A pair of free throws by Stewart gave USC first lead of the second half at 67-66 with 5:35 remaining. A hook shot off the glass by Metu gave USC a 72-68 lead, which was its largest of the game at that time with four minutes left to play. Troy then went on a 9-2 run over the next three minutes to set the stage for the heroics by the home team.

“Give Troy credit,” Enfield said. “They made shot after shot when they needed to.”

McLaughlin led USC in scoring with 21 points. Metu finished with 18 points, eight rebounds and three blocks. USC’s 10-0 record makes them one of only six division one teams without a blemish in the loss column. Enfield said he was extremely proud that his players would accomplish this without Bennie Boatwright. You would think being off to the basketball program’s best start in 45 years would be cause for celebration but the young Trojans are just focused on improving.

“We just have to come out every game to focus and lock in on that one game,” said Metu. “We try not to worry about what other people are doing.”

USC will try to continue its run versus Cornell Monday
Posted by Darrel Wilson at 11:30 PM