Clippers Take Out Frustration in Win over Dallas

LOS ANGELES -- The Los Angeles Clippers cruised to an easy 119-98 victory over the Dallas Mavericks on Wednesday night at Staples Center, to move into first place in the Pacific Division. The entertaining win was a reward to the fans that showed up for the contest and didn't stay at home to watch game 7 of the World Series. The announced attendance of 13,487 was their lowest since 2010 when they drew 11,504 on Thanksgiving. 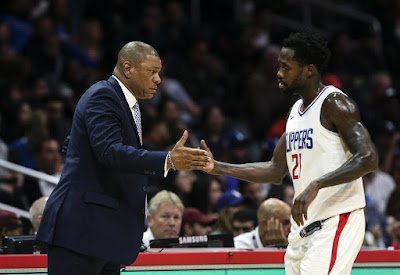 Blake Griffin led the Clippers with 20 points and seven assists. His play-making abilities have really been on display in this early part of the season.

“I thought we did a better job of getting back to our offense and things we worked on since camp started,” said Griffin.

The visiting Mavericks, who only have one win on the season, looked hungry for a win in the early going, as they held an eight-point lead midway through the first quarter at 21-13. The Clippers then tightened up on defense as they chipped away at the lead before eventually leading by three points at the end of the period.

“It felt like the first five minutes, we still had a hangover [from 141-113 loss to Golden State on Monday] defensively,” said Head Coach Doc Rivers. “We were awful. Then all of a sudden, we clicked in and start getting stops and running.”

In the second quarter, the Clippers continued exerting effort on defense in the beginning with the second unit, using it to get out into transition to take a commanding lead. The Mavericks were outscored by 15 points in the period.

“They had a smaller lineup, Gallo [Danilo Gallinari] was the four,” said Rivers. “I thought what happened was the spacing. Our guards were going downhill. We were able to feature Gallo and he made plays. It was good for him.”

Recently, there had been rumors about the Clippers acquiring former point guard Eric Bledsoe, who is on the outs in Phoenix to shore up their back court but it may not be needed because of the contributions Patrick Beverly and Rivers are making, in addition to super sixth man Lou Williams. Beverly had three steals and Williams scored 17 off the bench.

Without Chris Paul dominating possession, the ball seems to be moving a lot more than in previous seasons; the Clippers assisted on 27 of the 41 made field goals.

The Clippers have held five of its first seven opponents under 100 points. Their next two games will be back to back 12:30 starts on the weekend against Memphis and Miami, respectively.