No Griffin, No Win for Clippers a Day After the Huge Trade

LOS ANGELES -- The Portland Trailblazers defeated the Los Angeles Clippers 104-96. Damian Lillard led the way for Portland with 28 points, including a perfect 11-of-11 from the charity stripe. The All-Star guard filled the stat sheet in the win, adding seven assists, four rebounds, three steals, one block, and made five from behind the arc. 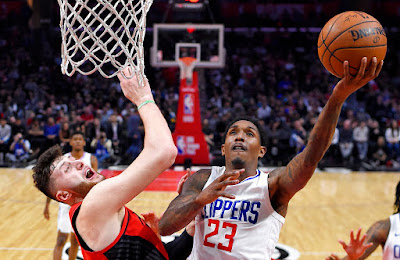 It was the short-handed Clippers' first game without superstar Blake Griffin. The home team looked lethargic throughout the game, as it appeared it was an afterthought because of the shockwave that occurred a day earlier.

Tuesday afternoon, the Clippers traded its star player and fan favorite, Griffin, to the Detroit Pistons. They received Tobias Harris, Avery Bradley, and two draft picks as the main assets in return. The Clippers were on the cusp of a playoff position and there is speculation the organization might be waving the white flag, to begin a rebuild. And there might be more moves to come.

"There are seven days left [until trade deadline]," said Clippers' coach Doc Rivers prior to the game. "This team has not changed its goals about the playoffs. Our goal is to do that. We don't have a lot of time to get this stuff together."

The make-up of this team is completely different from the one that was dubbed Lob City when the Clippers acquired All-NBA guard Chris Paul to begin the 2011/12 season to join Griffin, a combination that energized the franchise's fan base after years of disappointment.

Although entertaining, Lob City couldn't advance beyond the second round of the Western Conference Playoffs. In the 2017 off-season, owner Steve Ballmer brought in front office guru, Jerry West, to consult and help make improvements to the roster. CP3 left to Houston shortly after, and now Griffin in the middle of the season.

"Everyone was involved," said Rivers. "Nothing really changes, as far as how we discuss trades, at all... With Blake, I really enjoyed coaching him. We all will have regretted not even going to the Western Conference Finals. We had our chances."

In this game, the Clippers lacked energy from the jump, as a half-filled arena saw the visitors run off the first six points. Even though the Clippers kept it close for most of the first half, they never really threatened. Portland held a 56-51 halftime lead.

The Trailblazers, then, opened the second half on a 14-4 run to take a commanding 15-point lead that grew to as large as 20. They outscored the Clippers 30-16 in the deciding period.

The Clippers made a late push in the closing minutes to try to steal away the game. Lou Williams sank three free throws to cap a 10-0 run which drew the deficit to six at 100-94. Then a Jusuf Nurkic putback, followed by a Williams turnover that lead to a dunk on a fast break by former Clipper Al-Farouq Aminu, which sealed the deal for Portland.

Nurkic scored 14 points and secured a career-high 20 rebounds. Aminu also had a double-double, with 11 points and 10 boards. CJ McCollum chipped in with 16 points.

Lou Williams led Los Angeles with 20 points, off the bench, but only made 5-of-26 from the field. DeAndre Jordan pulled down 19 rebounds. Jordan provided his thoughts on the big trade and what his mindset for the rest of the season is.

“The organization felt like it was best for our team now and along the future," said Jordan after the game. "Blake was a teammate of mine for nine years, this whole time here. We had a lot of great times together and he’ll be a friend of mine after basketball... We have to Control the things that we can control and worry about winning games and getting better as an individual and as a unit."

The Clippers will have three days off before the next game against the Chicago Bulls on Saturday Afternoon. It will also be the debut of their new players.