LOS ANGELES -- The USC Trojans (5-5) hopes for a Pac-12 South title were ended on homecoming night as they lost 15-14 to the California Golden Bears (6-4), at the Los Angeles Memorial Coliseum. 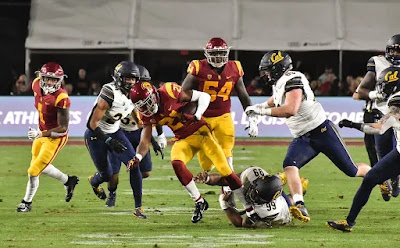 It was a tale of two halves as the USC Trojans dominated the play in the first and second quarters. However, that dominant team was unrecognizable after the break as they self-destructed by turning the ball over and showing lack of discipline. Credit goes to the Golden Bears who took advantage of the opportunities they got to leave Los Angeles with a win.

After the Trojan defense held the Bears to a three and out on the opening possession of the game, which started on its own three yard line, a 43-yard Cal punt and a fair catch by Tyler Vaughn gave the Trojans great field position at the Cal 48 yard line. Unfortunately for the Trojans, this drive stalled at the Bear's 25 yard line.

Coach Helton assumed play-calling duties the previous game against Oregon State, with much success, and was back at it again. As the Trojans were set to get three points from a 43-yard field goal on its first possession, they instead attempted a fake as place kicker Michael Brown rushed to the left end and was tackled from behind for a two yard loss. That is zero on the scoreboard for them.

“I will always try to put our players in the best position to make plays," said Helton. "Sometimes it works and sometimes it doesn’t. But I believe in our kids and in their ability to make plays. Wish we made a couple more today."

Tyler Vaughns opened the scoring for the Trojans with a two-yard touchdown reception from J.T. Daniels at the start of the second quarter to put them up 7-0. The play was set up by a 44 yard dash from Aca'Cedric Ware down the right sideline to set them up with a goal to goal to end the first quarter.

It was Vaughns again, midway through the second quarter, with another touchdown reception. This time it was from 23 yards out. It could not have happened without Amon-Ra St.Brown converting a fourth-and-6 with a reception on the previous play, taking a big hit in the process.

The Trojans were on their way to blowing the game wide open, going into halftime as they drove into the red zone with just under a minute left. However, St. Brown fumbled at the Bear's 10 and killed all of the momentum heading into the locker room and leaving more points on the field, as the scoreboard read USC 14, California 0 at halftime.

The Trojans came out of the locker room in the same sloppy fashion they went in with. On the third play of the half's opening possession from their 22 yard line, USC center Toa Lobendahn's snap went over Daniel's head, who then recovered it in the end zone for a Cal safety.

The Bears capitalized on their good fortune when they quickly scored on a three-play 50 yard drive, immediately after the safety, which was punctuated by a 29 yard touchdown pass from Garbers to Vic Wharton. The score made it a one possession game at 14-9.

When a Bear wants a taste of honey, it will keep beating down the door until it gets it. And that's exactly what the Bear's defense did on the very next possession when Traveon Beck intercepted Daniels, which led to a workman-like nine-play 40 yard touchdown drive for the Bears. Garbers weaved his way into the end zone on a five yard run to give the Bears a 15-14 lead. One that they would never relinquish.

With the Trojan defense trying to stop the Bears late in the fourth quarter, to give the ball back to its offense for one last chance to capture the game, they shoot themselves in the foot once again. A third down conversion by the Bears was overturned by the officials but an unsportsmanlike conduct penalty by Trojan defensive back Iman Marshall extended the drive for the visitors.

"I know he's sick about it," said Helton about Marshall's penalty. "But that one play did not lose the football game."

USC plays cross-town rivals UCLA next Saturday at 5 p.m. at The Rose Bowl.