LOS ANGELES -- It was fireworks night at Dodgers Stadium where the Los Angeles Dodgers baseball fans were treated to rockets spreading glare and bombs bursting in the air, both after and during the game. Powered by four home runs, the Dodgers defeated the Philadelphia Phillies 6-3 on Friday. 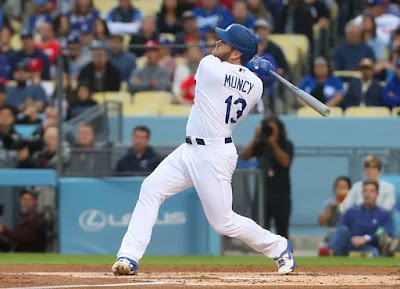 It is just a third of the way through the Major League Baseball season but with the Dodgers and Phillies having the two best records in the National League, this series could possibly be a playoff preview. There were an announced 54,307 fans packed inside the stadium at Chavez Ravine, which is the largest regular season attendance since 2012 and they were all here to shower boos on Bryce Harper every time he came to the plate. The Dodgers were one of the finalists on Harper's free agency list last winter, before he eventually chose to sign a record-breaking 13-year, $330 million contract with Philadelphia.

Early on, it appeared that it might be a pitcher's duel as the Dodgers' Kenta Maeda held the Phillies hitless through three innings. The Dodgers also squandered some scoring opportunities against Jake Arrieta early on as they stranded three of their hitters on base through the first two innings. Then things started to heat up from there.

The bottom of the third inning saw the Phillies shift its infield to the right side, just as the analytics scouting says to do for Joc Pederson but that did not faze him as he hit a hard grounder that gave Phillies second baseman Cesar Hernandez trouble. Pederson hustled to first to beat the throw, for an infield single. Max Muncy followed that up by banging Arrieta's second pitch, a slider, to the right field pavilion to give the Dodgers a 2-0 lead. Cody Bellinger hit a single through another infield shift. However, he was caught stealing at second. The Dodgers challenged the call but replays showed Hernandez skillfully blocked the bag, preventing Bellinger from touching it before the tag. The Dodgers inning then fizzled out.

Maeda's magic came to an abrupt end as Phillies' Center Fielder Andrew McCutchen blasted a breaking ball over the center field wall to lead off the fourth inning. Maeda then easily dispatched the next three hitters. Maeda struck out J.T Realmuto for the second time in the game to start the fifth but began laboring as he hit Cesar Hernandez and gave up a single to Scott Kingery. After Nick Williams grounded into a fielder's choice, getting to face his pitching counterpart with two outs must have felt like a gift for Maeda. However, Arrieta lined an RBI single to left field to tie up the ball game.

The Dodgers bats were looking to pick up their starting pitcher, who had won his previous three starts, at the bottom of the fifth. Pederson led off the inning by hammering a long ball about 445 feet to deep right field. Muncy then singled to follow that up. Corey Seager, who had been one of the team's hottest hitters over the last 10 games, drove Muncy in with a hit a two-run home run that just cleared the right field fence.

"They all count. I'll take it," Seager laughingly responded when asked if he is embarrassed that his home run was the shortest of the night. "[Arrieta] is tough. He kind of got us the first time through and the second time through, we kind of capitalized off some mistakes."

The big inning gave the Dodgers a 5-2 lead and Maeda a little bit more cushion to work with. Maeda made quick work of the Phillies -- one, two, and three outs -- in the top of the sixth inning and handed the game over to the Dodgers' bemoaned bullpen. Maeda finished with six strikeouts on 97 pitches to go to seven wins, with two losses on the season. The pen gave up only one run, charged to Dylan Floro. Kenley Jensen finished the game with a one-out save, his 17th of the season.

"It was very positive," said Jensen regarding the bullpen's performance in this game. "For us, down the road, in the bullpen, to lock it down is going to be great for us."

The three hitters in the top of the batting order for the Dodgers -- Pederson, Muncy, and Seager combined to hit five for 11, with five runs batted in, and five runs scored. Kiké Hernandez added a long solo bomb in the eighth inning.

The Dodgers improve its record to an MLB-best 39-19. While the Phillies drop to 33-24. Dave Roberts' right-hand man Bob Geren managed Dodgers in this game because Roberts took the night off to watch his son graduate from high school in San Diego.