LOS ANGELES -- Hyun-Jin Ryu strikes out nine batters and Andrew Toles powers the Los Angeles Dodgers' offense on a sunny Sunday afternoon to complete a three-game sweep of the Philadelphia Phillies with a 5-3 win. 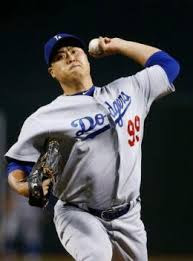 Ryu won his first game after coming up empty in his previous five starts to begin the season. In fact, due to missing the last two seasons with elbow and shoulder injuries, Ryu had not won a game in 973 days.

"Today is definitely a milestone for me just because it's been almost a thousand days since I had a W," said Ryu through an interpreter. "I'm looking to build on from this moment and always try to put the team in a position where we can win... It's been a difficult road but now that I am here and I actually got my first win, I am very happy."

When Cesar Hernandez opened the game with a triple to deep right then scored on a Freddy Galvis single, Ryu could have lost confidence and let his struggles continue but he did not. He immediately settled down and retired eight consecutive batters, 12 out of the next 13 overall, to keep the visitors at bay.

Offensively, the Dodgers got on base eight times in the first three innings against Phillies' starter Nick Pivetta, who was making his Major League Baseball debut, but were only able to score two runs in the early innings. Toles led the game off with a double for the Dodgers and advanced to third on Cody Bellinger's infield single. Then the hot hitting Justin Turner followed with an RBI single, which extended his hitting streak to 16 games.

"You try to put good innings together every inning and scratch out as many runs as you can," said Justin Turner.

Enrique Hernandez hit a solo home run in the second inning to give the blue a 2-1 lead. However, the Dodgers failed to do much else through five innings. Fortunately, two runs were all the Dodgers needed for Ryu to be comfortable in the best outing of his comeback season. In the sixth inning, Daniel Nava was Ryu's ninth strikeout victim. Dodger Manager Dave Roberts then brought in the bullpen after 93 pitches.

"He threw the ball well," said Dodgers' manager Dave Roberts. "The pitching mix was good. The change was good. We could have tried to get him through that sixth right there. But I thought it was a real good outing for Hyun-Jin."

In the bottom of the sixth inning, Toles hit a two-out, three-run bomb to right center to give the Dodgers a 5-1 lead and some breathing room to try to close the game out.
"Andrew is fun to watch," said Roberts. "He doesn't scare from a big spot. He just wants to help us win. And today, that three-run homer was huge.

"He's still a young player in the big leagues and not knowing the entire league but really not caring. He's just going out there and competing, trying to put together at bats, playing defense, and trying to help us win baseball games."

It was Toles' fifth home run of the season, which tied him for the team lead with Corey Seager. Toles' career high thus far had been seven home runs, which was in the minors. Prior to the game, Toles was consulting with Turner on his swing mechanics.

"The guy can hit, he can flat hit. We saw it last year," Turner exclaimed. "Even the outs that he's making, he's hitting rockets all over the place. We all know how strong of a guy he is. When you swing at good pitches in the zone, they tend to go a long way."

The Phillies added two runs in the top of the ninth inning when Obudel Herrera sent a Grant Dayton pitch deep to right center with two outs. Kenley Jensen was summoned to record the final out.
The Dodgers have now won four straight games, which is their longest streak of the early season. They next host the San Francisco Giants for a series that opens Monday night with Clayton Kershaw on the mound.

Posted by Darrel Wilson at 8:00 PM