Clippers Rout Kings, Get Home Court in Round One 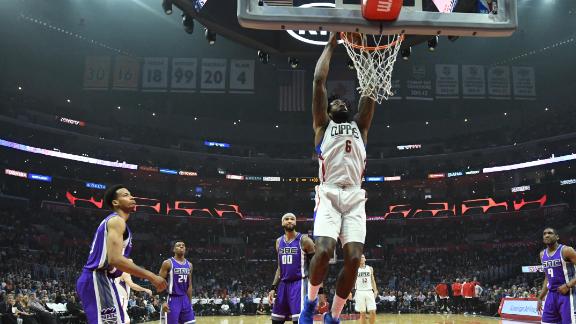 LOS ANGELES — With home court advantage for the first round matchup against the Utah Jazz in the NBA playoffs hanging in the balance, the Los Angeles Clippers defeated the Sacramento Kings 115-95 in front of a raucous Staples Center crowd in its final regular season game.

“I wanted to win the game,” said Doc Rivers. “I thought it was good for our guys to win, but honestly home court is still more important and we got that, so that’s nice to get for us.  That’s a bonus.”

DeAndre Jordan led the Clippers with 18 points, 17 rebounds, and four blocked shots.  Chris Paul scored 17 points with nine assists. J.J. Redick contributed 18 points, including three from downtown, breaking his own Clippers’ single season three-point record with his 201st make from behind the arc this season.

Chris Paul’s midrange jumper halfway through the first period gave the Clippers a 17-15 lead, which they would never relinquish. Los Angeles led Utah 30-23 after the first quarter.

“We played all of these games to get to this position,” said Paul. “We had our ups and downs [this season], but all that’s over now, and it all means nothing anymore.”

Most people would have expected the Clippers to pull away from the Kings early in this game considering what was on the line but there they were, only leading the Kings 41-39 with 5:58 remaining in the second quarter.  The lead grew to as large as 10 points after that but Sacramento kept fighting and only trailed by six with a 53-47 halftime score.

The Kings made the first basket of the third quarter, and it appeared the Clippers wouldn’t be handed the fourth seed in the West. The game was played within a six-point margin for the first portion of the third. However, the fight turned into a sparring match for the Clippers, as the Kings started to run out of gas, which was signified by Kings’ guard Ben McLemore missing a breakaway dunk. The lead would be stretched to 14 by the end of the third.

The Clippers finish the season strong by winning their seventh consecutive game, which is the longest active streak in the NBA.

The focus now turns to preparing for the playoff matchup with Jazz, which begins Saturday night at 7:30 p.m. at Staples Center.

“We have to clean up our mistakes,” said Griffin. “This is what we played 82 games for.”
Posted by Darrel Wilson at 11:30 PM