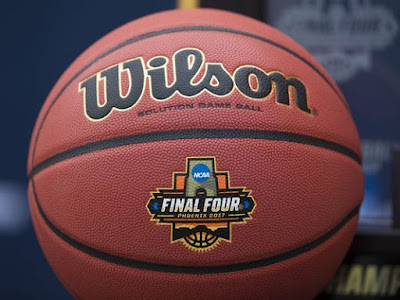 The Final Four will be played this weekend in Phoenix and there are some interesting matchups that nobody thought we would be presented with. We've come down to the Blue Blood versus the field, vying for the NCAA Men's College Basketball Championship.

Raise your hand if you had the South Carolina Gamecocks reaching the Final Four in your bracket. How about the Oregon Ducks? Maybe you had the Gonzaga Bulldogs but they were the unlikeliest of the top seeds chosen to reach this far. By far, the most popular of the national semifinal participants are the North Carolina Tar Heels -- the only blue blood college basketball program playing this weekend. To the common eye, this is the Tar Heel invitational, but don't be surprised  if these other teams make you put some respek on their name by the time it's all over.

Another way to look at field of teams is as a geographical battle because each matchup pits a school from the Pacific Northwest against a school from the Carolinas. In the first game, its Gonzaga versus South Carolina; there's good reason to cheer for both of these teams. The second game features Oregon and North Carolina.

Gonzaga is a small school that plays in a small conference, which they have dominated for the last quarter of a century. The Zags, as they're commonly referred to by, have been to 20 straight NCAA tourneys and regularly advance to the sweet 16 but that's about it. This season they were the last remaining undefeated team and held down the number one spot in the polls for a few weeks and are playing in the program's first-ever Final Four, so this might finally be their breakthrough.

This is also South Carolina's first trip to the Final Four. Although they play in a power conference, they're not known for basketball but maybe that will change since Frank Martin is the head coach. Martin is probably the top feel good story of this thing. By now you've heard about Martin's story, if not you best read up, then come back to this article. You see... nobody really cares about this team except for alumni and people with close ties to the players and staff but everybody wants to see a guy like Frank win.

Before making the Final Four, Oregon held the distinction as the team that had gone the longest time between Final Four appearances -- 78 years. They're the team that most of the haters will be rooting for since there are people who simply don't want the Tar Heels to prosper. As I just mentioned how Martin is beloved, there are folks who are calling for Dana Altman's head because of a scandal from three years ago. That situation withstanding, the Ducks are on the rise and they shouldn't be slept on.
North Carolina lost on a buzzer beater in last year's National Championship game to Villanova. Most of this year's players were on that roster and feel like they have some unfinished business -- they do. So as just reaching this point is a major accomplishment for the other teams, not cutting down the nets on Monday night will be a major disappointment for the Tar Heels. Let's leave it at that.

If you just go by what most people expect then the two number one seeds, Gonzaga and North Carolina, will play each other in the championship game on Monday. However, South Carolina is peaking at the right moment and these are the type of games where the Zags have faltered in past years and if Oregon can knock off the number one overall seed in Kansas, they can do the same to North Carolina, then we'll have a matchup versus the perceived-scumbag coach versus the loveable one. I don't see that scenario happening and, personally, want to see both west coast teams win because I've covered their games in person this year and it will make most of the country mad; CBS would have some poor ratings.

Gonzaga won't lose Saturday and North Carolina shouldn't lose, although it is a very winnable game for Oregon. I hate calling matchups before it's a certainty but will predict that Gonzaga will defeat North Carolina on Monday night.

Posted by Darrel Wilson at 9:29 AM