The terms MVP, 6th Man, and Rookie Of the Year all are sub-categories of what's known as "post season awards".  Every year there is what I like to call misconceptions about who is deserving of these awards.  I'll make one thing clear;  even though these accolades are awarded in the post season, how someone, or his team performs in the playoffs have absolutely no bearing on if he's deserving or not.  If you don't understand that most of the time the ballots are turned in before the season is even over, you should now.  What "post season" means in this context is the award is given out after the season is over, in the same way that preseason awards are predictions of who will win these awards and not awarding trophies for players' performances in the preseason. 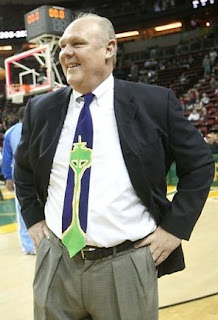 Denver Nuggets head coach George Karl was selected by voters for Coach Of the Year for the 2012-13 NBA season.  They did so because many pundits predicted that his team would struggle to make the playoffs; some even saying that they wouldn't make the playoffs.  Denver not only made the playoffs but won 57 games (good enough for fourth best in the NBA). They made their bones this year with a league best 38 wins at home in the friendly confines of the Pepsi Center.  Couple that with running off 15 straight overall at one point and this was a team no one wanted to see, no matter what the venue.  George Karl accomplished these things without one player that was worthy of an All-Star selection.  He implemented a style of play that was very exciting to watch, Denver lead the NBA in fastbreak points per game and points in the paint by a wide margin.

Those claiming that Karl shouldn't have gotten the nod are those who remember conveniently.  Granted the Nuggets lost to the, Mark Jackson coached, Warriors in the first round of the Playoffs.  But let's think back to the 2006-07 season.  In that year the Dallas Mavericks and their star player Dirk Nowitzki were bounced in the first round of the playoffs - coincidentally by these same Golden State Warriors.  When it was time for the MVP award to be handed out, Dirk Nowitzki was the name called.  Should the NBA have demanded then that voters re-submit their ballots factoring in what had just transpired?  No, not at all.  Dirk was deserving of the award because he had a spectacular regular season in the same way that George Karl is deserving of his selection.

Rounding out the top five is Erik Spoelstra of Miami, Mike Woodson of New York, Gregg Popovich of San Antonio, and Frank Vogel of Indiana was a distant fifth.  All awards given out are subjective and voters have the right to choose whoever that they want on their respective ballots. That being said I feel that Mark Jackson was slighted in the voting.  Everyone in the top five coached for a team that finished in the top three of his conference, maybe the Warriors sixth place finish was too much of a factor in some voters' decisions.
Posted by Darrel Wilson at 12:07 PM