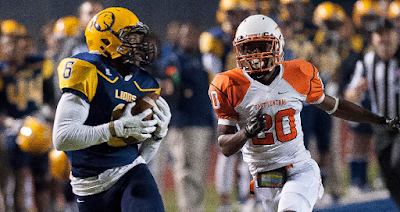 Pro Player Insiders caught up with the two-time Lonestar wide receiver of the year, Vernon Johnson, out of Texas A&M-Commerce for an exclusive interview during the NFLPA Collegiate Bowl.  Here’s our exclusive story.

Goals outside of playing football:

I want to become a successful businessman and to be able to support my family. I want to make smart investments. I like reading about stocks and people like Warren Buffett because of what they’re able to do with their life by multiplying their money. I’m a strong believer in the theory that your money should make you money.

My nutritionist is going to kill me for saying this. She says I can have a 20% risk if I eat good 80% of the time. In my 20% of the time, I like to eat bacon cheese burgers. I like to go to San Diego and get carne asada fries with guacamole, and put sour cream and cheese on it.

Red, because it sticks out.

To relax me, I listen to 90’s R&B. There are some games that I listen to Chakka Khan or Earth Wind and Fire to get me ready for the game. I like listening to weird stuff.

On playing in NFLPA bowl:

I’ve read about it, and just from my experience here, I can tell you that it’s very helpful. It’s not just about the football field. They get you ready for the rookie year, your whole life, finances, talk to you about women; all that stuff. They know everything and they are here for you.

Skills that he’s working on improving to be better on the next level:

Being more patient in and out of cuts, and also being more patient with my routes. I’m a very fast guy so I always think “go go go” and there are some routes where I don’t need to always “go go go”. Just need to know my route tree better, just focusing on that.

Player that he emulates:

Probably Mike Wallace or Desean Jackson. Those are guys that can stretch the field. I like to take the top off of the defense.

Top priority to get ready for the scouting combine:

I just need to work on my technique. I’m already pretty athletic, there’s a lot of technique in getting stronger in your ankles for whenever you’re going to do your verticals. You have to have your ankles steady for the 40 time. A lot of that stuff, people don’t think about it, it makes a big difference in your 40; arm drive, leg drive are some of the stuff that I’ve been learning here. It has already helped out a lot so I just want to keep getting better and to just become a better player.

Likely the freedom, being able to become a man. You’re not under your mom’s wing all of the time. You get those growing pains because you spend all of your money on fast food, when it comes to Saturday and Sunday, you have to eat Ramen Noodles. I’ve learned that lesson about not eating bacon cheeseburgers all of the time. You can order from the dollar menu or get some bread and make the money last.

Everything happens for a reason. I’m a strong believer in that. I feel that God has everything planned out. I’ve been through situations where I know I shouldn’t be here. I’ve seen a lot of things happen to people that they feel that shouldn’t happen but if it’s in God’s plan, then it’s meant to be. I strongly believe that. That’s one thing I’ve learned going through college, is if it’s meant to be, then it’s going to happen.

I like Antonio Brown. He’s a low-key player, not too flashy. A lot of people think that he’s underrated. He’s just a great player, maybe a smaller guy but he does great for his team.

Favorite Player of all time:

The funny thing is even if I had money for my dream car, I probably wouldn’t buy it because it’s not about material things. You have to be able to manage your money right. If I had to name one, it would probably be a Lamborghini, but if I had $100 million, I probably still wouldn’t buy it.

I have three actually. They are Friday, Lords of Dogtown, and Friday Night Lights… duh.

What he dislikes most out of society:

Just everybody being judgmental and not giving others a fair chance at life. There are a lot of people that get looked at on the outside, but it’s about what is on the inside. People might look at me, I’m covered in tattoos and they might think I’m a criminal or something. When in reality, I’m probably the nicest person in the world. I want to get people to understand that you have to talk to people and see where they’re coming from because a lot of people don’t think the same way. If you just look at somebody and judge them by their cover, you’re not going to get anywhere in life, only be a judgmental and crude person.

I feel like everybody is put on earth to help somebody in some type of way. If you live your life like that and make an impact on somebody’s life, I think you are doing your job on earth. There are people that think they are here to just live and worry about themselves but it’s not about that at the end of the day, it’s about going out and helping other people. Here at the NFLPA game, it’s what they’re doing for us. They’re going out and helping us. I love that.

Posted by Darrel Wilson at 1:45 PM