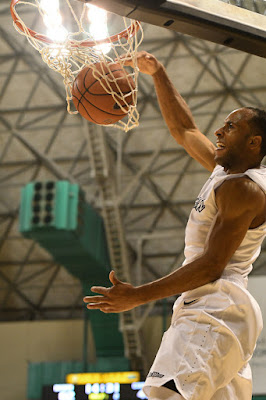 LONG BEACH, Calif. -- The Long Beach State 49ers raced past the California State University, Los Angeles Golden Eagles for a 95-59 victory in their season opener Friday night in Long Beach. The 49ers are the favorites to win the Big West Conference and their display against the Eagles confirms the preseason selection.

Leading the way for The Beach was point guard Justin Bibbins, who filled the score sheet with 12 points, seven rebounds, six assists, and four steals. Bibbins was a Second Team All-Conference selection a season ago.

"Justin is an elite player in this league," said Coach Dan Monson. "He can play with anybody in this country. We're going to give him an opportunity to go prove it."

Over the past seven seasons, Long Beach State has ranked no lower than sixth in the nation in non-conference strength of schedule, according to Ken Pomeroy's ratings. The 49ers will immediately go on the road to play four teams who played in the NCAA tournament last year; they have Wichita State, No. 6 North Carolina, No. 14 Louisville, and No. 20 UCLA.

"We needed some confidence to buy into what works," said Monson. "Now we're going to get tested. They need to know what it's like to be at that level. That's the level we want to be, at the end of the season. No matter what happens, we're going to come back a better basketball team at the end of this week and that's why we play this schedule."

Friday night was the first time the two schools played each other since the 1992 season. Cal State L.A. was essentially a tune up for Long Beach State. The up-tempo style employed by Monson's team made it hard for the Eagles to keep up with. The 49ers continued to pound the ball inside and attack the rim; Long Beach State dominated the Points in Paint category 52-18.

Defensively, the 49ers applied pressure via the full-court press after made free throws and perimeter traps, which forced turnovers and resulted in easy transition points. Long Beach State led 51-38 at halftime and came out of the break turning up the pressure. One two-minute run of play featured Loyola Marymount transfer Evan Payne break away for three dunks to stretch the lead to 64-45 to put the game away. Payne was the game's high scorer with 15 points.

"I think [Payne] showed a level of comfort," said Monson. "He's been so locked-in to try to do what we ask of him defensively, he hasn't been comfortable on offense. Today he got out in the open court. He's as good as any player I have had in the open court."

The contributions from the visitors were minimal, aside from a crowd-pleasing dunk from Desean Scott in the first quarter of the game that provided the crowd in arena with much-needed energy, and ironically fueled a 49er's run to close out the first half.

The 49ers had two other players score in double figures, forwards Yussuf Temidayo and Gabe Levin, with 12 and 11 points, respectively. Overall, Monson utilized 14 players in this game, with 10 of them playing at least 10 minutes. Long Beach State is going to need all hands on deck to come back from this road trip with positive results.