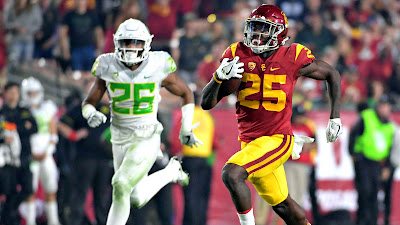 LOS ANGELES -- A day before clocks are to be turned back by an hour in the fall, USC Trojans turned back the clock in the Los Angeles Coliseum and plucked the Oregon Ducks' feathers. The Trojans, behind a strong defensive effort and a running game defeated the Ducks 45-20 on homecoming night. USC's defense set the tone for the game as it thwarted the Oregon attack and forced three consecutive three-and-outs to begin the contest.

That enabled the Trojans to jump out to a 17-0 lead, which was never in danger. The Ducks, known for having an explosive offense, were held under 300 total yards by the Trojans, including only 85 on the ground. Oregon entered the game averaging 248 rushing yards per game.
​
"That is a really good rushing team," said USC's Head Coach Clay Helton. "One of the things [defensive coordinator] Coach [Clancy] Pendergast does is focus on taking the strength away from the team. The other thing we talked about was getting off the field on third down. We thought that was critical."

Read the rest of the story here