D'Angelo is Getting There 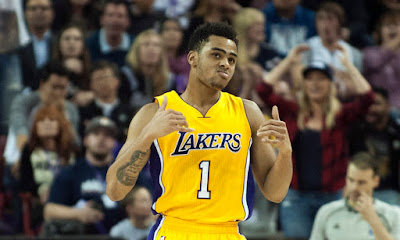 I am a Lakers fan but, up until the other day, I was not a fan of D’Angelo Russell. In the 2015 draft, I felt there were more pressing needs than the point guard position; Jordan Clarkson made the all-rookie team as a point guard. And because I always like to think I’m right, the draft pick didn’t sit right with me. I saw this video and liked the enjoyment he showed for the game.

Once the season began, Byron Scott thought it was best to make Russell earn his minutes and I agreed with him. I was probably the only person who did agree with the decision. Today’s athletes have a sense of entitlement, work for it first. Russell sulked, I thought that wasn’t cool. Eventually, Russell got his time to shine and basked in the “I Got Ice in My Vein” game. Lakernation was quick to point out how wrong Scott was to hold him back. Would he have been so cold if his hand wasn’t forced by Scott to work on his game? Hmm.

Spring has arrived and D’Lo mania is on, but then came the snitch incident to kill the vibes later that month. It is funny how we can clown and slander on social media but when it comes to one of our own players, all types of defenses are created, knowing good and damn well if this happened on rival team, we would be in full-attack mode. I come from a place where what he did in this incident is unforgiveable but I guess this is a different era. After being froze out for a game and facing the music, I was happy to see him finish the season strong because being scrutinized and having your character questioned can break a young man but Russell stood up under it.

Over the summer, Russell worked hard on his skills and now there are expectations for a Most-Improved-Player type of season from him. One quarter into the season, the “This is my shit” moment happened, my first thought was that it was to early. The following quote from an ESPN Mag article began making waves:


Kobe deserved every bit of attention he got in his last year, but there's freedom in Kobe not being around... There's no one leader, no face of the Lakers.

As strange as it may seem, that made me become more accepting of the kid. It showed a willingness to be accountable for his actions. He also knew it would draw more criticism from pundits and he was prepared for it. I'm hoping that Russel continues to make strides and help usher the team back into winning times.
Posted by Darrel Wilson at 1:27 PM