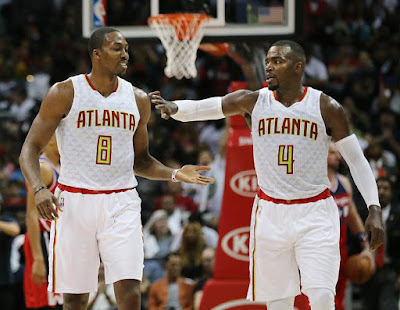 Not much game action on my birthday. What do you think about the rumors of Lebron wanting to ban the Kardashians from being near the team?

Here's my quick take on the mini slate:

There have been grumblings about my dude Johnny Wall and Bradley Beal not liking each other even though both try to dispel the narrative. However, their play on the court last night said different as they fell to the Hawks. You can’t scream you’re the best back court in the league if Dennis Schroder, some guy named Malcom Delaney and Kyle Korver outplays you. I may have ranked Atlanta too low, Dwight Howard is going to have his way in the East. Tim Easy Way dropped 21 off the bench.

In Chicago, all the talk was about having a team of ball dominant guards who couldn’t shoot. Although that may be true. Wade, Butler, Rondo, and MCW were a combined 10 of 15 from downtown as they beat Boston.

Sacramento hosted the first regular season game in its new home and gave The Machine a run for their money until Kawhi shut everything down with four steals in the third quarter. Kawhi is the MVP after two games. Boogie dropped 36 points and 17 boards in a losing effort.

The Clippers second unit looked impressive against Portland, that’s how they got the win, it’s probably the best in the league with the addition of Felton and Mo Buckets to J-Crossover. Dame did all he could for the Blazers. Coach Stotts need to start running out better lineup combinations.

Posted by Darrel Wilson at 3:30 PM