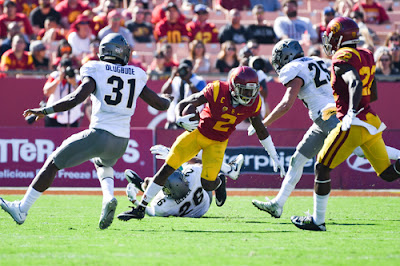 LOS ANGELES -- The USC Trojans defeated the 21st ranked Colorado Buffaloes 21-17 Saturday afternoon with some key plays by redshirt freshman quarterback Sam Darnold and All American Adoree Jackson. The Trojans offense had their way with the Buffaloes, who entered the game ranked for the first time since 2005, but you wouldn’t know by looking at the final score.

Darnold led USC down the field on its opening drive and it appeared the home team would scratch the scoreboard early but they turned the ball over when Darnold scrambled from 18 and fumbled on the goal line. The turnover seemed to be the popular play of the game for the Trojans.

Read the rest of the story here

Posted by Darrel Wilson at 8:00 PM