Basketball season is here and we have some excitement to take our minds off of Trump, Clinton, and the presidential election. Thus it is necessary for me to get some of these thoughts off before the association gets into full swing. So, here is my snapshot version of the Western Conference outlook. 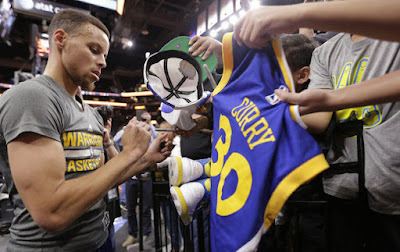 1. The Dubs  Fitting nickname for a team that racked up Ws at a record clip last season. As a matter of fact, they added 15 more in the playoffs, including the 3-1 series lead in the Finals before they added Pookie to the roster and smoked off the championship to Cleveland.

Over the summer, they were able to replace the uber athletic Harrison Barnes with some guy named Kevin, who most people think will make them unstoppable. This team will undoubtedly win a lot of games in blowout fashion.

Don't forget they were supposed to win it all last season but didn't. One thing swept under the rug was the fact Andrew Bogut was injured in game five of the finals; they were not the same without his physical presence. Guess who the Dubs shipped off to make room for Kevin... yup, Bogut.

2. The Machine  It is all about execution with this team. Working the system is why they have contended for championships year in and year out in the Popovich era. Tim Duncan retired and officially handed the on-court keys to OG Bobby Johnson, better known as Kawhi who still drives his '97 Chevy Tahoe from high school. There is nothing exciting to see here except a nightly clinic on getting open buckets and making your opponent work for everything.

Pau Gasol will try to fill in for Timmy, which he won't have a problem with on the offensive end but the team will truly miss Duncan on defense; he always made sure his guys were in the right place.

3. Clippers  Do not expect me to waste too many keystrokes on these perennial under achievers. They have a championship coach, passionate owner, the best pure point guard of the modern era, an athletic freak of nature at power forward, the best defensive center in the L, annual favorite to win sixth man of the year, and three-point assassin in JJ Reddick.

They might even be good enough to finish second in the conference when it is all said and done but will ultimately be judged by if they can exorcise their second round demons.

4. Kush Blazers  I am a hip-hop head first and foremost, so I love that Dame Dolla has an album coming out. I remember dudes like AI and Kobe were going to drop records but never did, but then again, they did not have bars like Dame. I would love nothing more than for him to drop a diss record about every point guard he lights up this year.

Dame has come out and said he wants to be the MVP, which nobody ever does. Dame knows that MVPs are only given to players on the best teams in the league, and knowing he has this on his brain means he has confidence in his teammates. And that is good enough for me to place them here.

5. The Westbrooks  I’m going out on a limb here because I don’t think the drop off due to Kevin leaving is that great, neither is the Serge exodus. I’ve always thought this was Westbrook’s team and since the former MVP wanted to bounce, it gives the rest of the gang more chances to play a larger role.

Most of the returning players aren’t saying they feel betrayed by Kevin, but they have to be feeling some type of way and it’s going to fun to see them leave their souls on the floor to try and show him they didn’t need him any fucking way. Acquiring Oladipo to be Westy’s running mate is bad news for opposing teams who want to hide their guards on defense.

6. NASA  Mike D’Antoni reintroduced pace back into the league when he took over the Suns job in 2003 and ran his 7 seconds or less offense. Daryl Morey is the statistics guru who’s had an imprint on the nerd revolution that has taken over the sports world, especially the NBA. Morey basically took the finer parts of what D’Antoni did with Phoenix and ran it through super data machines and churned out the blue print for winning basketball.

We now have a match made in offensive basketball heaven with the aforementioned gentleman. We also have the scoreboard operator’s nightmare. If they can figure out a way to stop people, they might win a championship, but since all they have is Ariza and Capela on defense, I’ll settle for The Beard, Eric Gordon, and Ryan Anderson getting buckets.

7. Stockton’s Old Team  They added some old heads in Iso Joe and Boris Diaw, aside from them, this is a young team. What’s old are the glory days of Stockton and Malone and when Deron Williams used to be elite. What’s also getting old is the rhetoric that this team is up and coming. I don’t get why everyone wants them to be NEXT.

I mean, I like Favors, Hood, Gobert, and Exum as individual players but think Hayward is a tad bit overrated, can’t figure out why Alec Burks got paid and brass traded for Dru Hill, I mean George Hill.
Anyway, they’re here strictly because I MUST be missing something. So to save myself from looking like an ass…

8. The Pups  In my neighborhood, I can’t look outside without seeing people walk their little creatures and look so happy to pick up poop, but that’s only for annoying cute ones that are kept in the house. For the most part there is a disdain for all others, particularly the ones that sleep outside; people mistreat them, euthanize them, and basically, aren’t welcomed in society.

Wolves are the largest member of the dog family, and just like all dogs, are usually cautious around humans but they aren’t domesticated. In the NBA, all the other teams have abused them for the past 12 years without repercussion. But this pack is going to start biting now that they have a trainer, err coach, who specializes in making his subjects defend and reach the playoffs.

Wolves mate in the winter time, look for these kids to start screwing everyone over after Christmas then wear down in April. I think they can finish higher than the 8 seed but I purposely placed them here because I want them to matchup against the Dubs. The Dubs weakness is the big man, the leader of pack is the best young big man in the L and ironically, a KAT.

9. Mavericks  Teams out of the playoffs and number three up top do not get nicknames from me, but if I were to name them, they will be the Geezers. Full Disclosure, I think they will make the playoffs but because of number 7, you know.

I liken this team to the old man in the park that’s looking for a good run but everybody takes him lightly until he starts roughing you up, faking you out your sneaks, and raining threes on you until you’re like, “WTF!” This is definitely a team full of that old man in the park spread out across all positions on the floor except for Harrison Barnes, who just got the boot from Silicon Valley and got major cake to not be the go-to-guy.

10. Grizzlies  The transition from ground and pound to pace and space is going to be a hard one. A bunch of square pegs trying to squeeze into a round hole. I see a lot of rectangular bricks failing to fall into a circular rim.

11. Nuggets  There is a lot to like about this squad, including Coach Malone and... Well I guess there is not much to like. Most of these guys play the same position. We can't even call Faried by his once-cool nickname any more.

12. Suns  Now there is a lot to like about this team, at least for the University of Kentucky fan in me. With the trio of former UK guards flying up and down the floor, this team will be fun to watch.

13. Lakers  The marquee team in the league is actually building from scratch, something that has not happened since before color TV.

14. Kings  They have a nice new arena, at least. #FreeBoogie

15. Pelicans  I wonder if Antonio Davis regrets taking the money so soon.