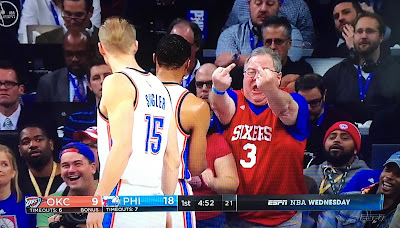 It was my son’s second birthday. Therefore I didn’t know how much hoops I would be taking in but I bore witness to some pretty fascinating stuff. Like the photo above, for example. That's an example of Trump's America folks. What bothers me most are the two clowns laughing at that idiot. Don't condone disrespectful behavior.

Westbrook looked like we all expected him to. I did not watch the entire game but from the little I did see, I noticed something I had not before. On a few occasions, Westy operated from the post against smaller guards, featuring this part of his game more will make him a more efficient scorer. Before I started writing this piece, I ran across the photo below and it all made sense. 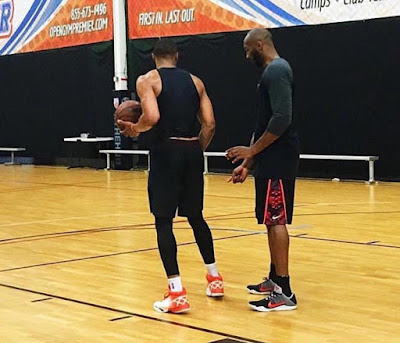 The Lakers vs Rockets games was interesting for many reasons:

First, I love that Mike D'Antoni continues to throw conventional wisdom to the wayside. MDA has Harden playing full-time point guard. You remember when people were saying Oklahoma City should move Westy to the two and let Harden run point? The Beard had 14 dimes at halftime. I love it. Next, NASA eventually caught the L and it was because Luke Walton pressed the right buttons. He transformed my favorite Laker, Julius Randle, into Draymond Green. I'll make it clear and state he's not on Green's level but he is a better low post scorer. Julius brought the ball up many times and initiated the offense with great success, he finished with an 18 points, seven boards, and six dimes stat line. Finally, Luke showed us why he kept Metta World Peace on the roster, to be a goon. Metta was inserted into the game and immediately paid dividends. He played two minutes and got called for three fouls but those fouls changed the game, he showed the kids they can't just let the Beard punk them. LAKERS WIN! LAKERS WIN!

Anthony Davis acted a fool with his 50 points, 16 boards, seven rips, five dimes, and four swats. A completely unheard-of stat sheet. I think he might have been disrespected by the GM survey. But that boy needs some help. Fa real fa real.

I hope you enjoyed the read.

Posted by Darrel Wilson at 2:30 PM