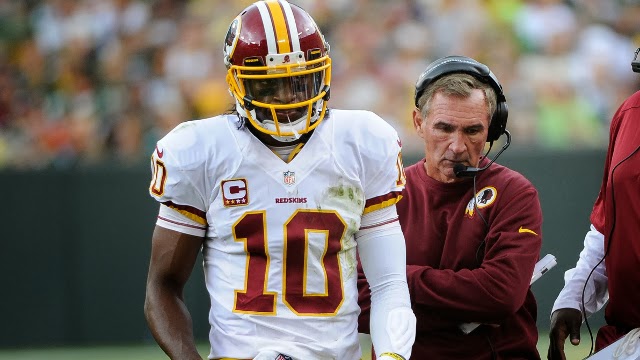 I feel like I should say something about the situation going in Washington regarding their coach and the quarterback that loves to take off and scramble. After all he’s a coach that made a ballsy decision to go with a quarterback at the beginning of a season when nobody had any real idea as to how he would perform. Even after losing this past week, there’s no doubt that the coach chose a leader of men whom in which all of his teammates will go to battle for. This week, his team is on the road in a city that they’ll most likely visit in February. Of course, I'm speaking of the team that plays in Seattle, Washington.

In the other Washington, pure Shanahan-igans have broken out. It was reported that Shanahan cleaned out his office last season in anticipation of his dismissal. Then all of a sudden he decides to shut down his star quarterback for the remainder of the season for reasons that are truly unknown. I’ve never heard of a quarterback being benched so that he won’t get injured when he’s not injured.

The NFC North can be decided by key injuries. The Chicago Bears announced that Jay Cutler will regain his starting quarterback job now that he is healthy. Cutler’s Josh McCown had been one of the better signal callers over the past few weeks; you would think the team would want to ride with the hot hand, we’ll find out if it was the right decision soon enough. The Detroit Lions can’t seem to win if Reggie Bush isn't getting touches. Bush slipped while warming up in the blizzard and aggravated his calf. Meanwhile in Wisconsin, the Packers sit just a half a game behind the division lead, all while only winning one of their last six contests since Aaron Rodgers injured his clavicle. Finally, the Vikings might lose Adrian Peterson for the rest of the year; they weren't in contention but it surely is a pleasure to watch him play.

I’m so late in writing this column this week that I can mention that the Denver Broncos lost the stranglehold that they had on home field advantage in the AFC when they lost to the San Diego Chargers. As usual, defense was Denver’s down fall. The Chargers pounded them on the ground and kept moving the chains; they had almost 39 minutes of possession which kept Peyton Manning off the field. Sometimes the best defense is a good offense. This was a big win for San Diego because it kept them in the playoff race, they’ll have to win out and hope Baltimore and Miami lose some games.

In week 15 there are a few matchups that deserve your attention.

Raiders @ Chiefs  The Broncos’ loss makes this very significant. Before, I viewed Kansas City as the automatic fifth seed because but win this week will put them in a tie with Denver for the best record in the AFC. They need Denver to fall again but there is now hope again for a 1st round bye.

Patriots @ Dolphins  New England now controls their own destiny if they win-out. Miami badly needs a win to stay relevant; they’re currently in the seventh position in the AFC playoff hunt.

Packers @ Cowboys  Both of these teams still have an opportunity to win their respective divisions but are on the outside looking in at the moment. It could be curtains for the loser of this game.

Ravens @ Lions  This should be a good game to close out the week on Monday Night Football. These two squads are holding down a playoff spot but are skating on thin ice. It's crucial for the defending champs to win because they close out the season against New England and Cincinnati. Detroit has a slight better chance to make up this defeat against the likes of Minnesota and New York Giants; still a win is a must. This should be a great game.


Until the next time my cerebral spinal fluid leaks on your screen...