So many teams had a chance to make a statement in week 15 and strengthen their playoff position but failed to capitalize on their opportunities. The top three seeds in the AFC all lost and gave other teams hopes of getting either a playoff bye or home game. Outside of the West division, the top teams in the NFC are falling by the wayside. Now there are teams whose life lines were weak just a week ago, are now revitalized. 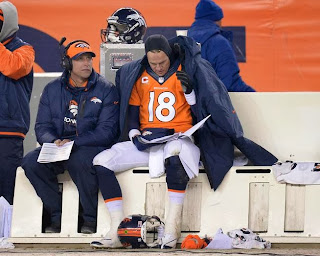 The AFC's number one seed, Denver Broncos, started off the gift season by losing at home to San Diego Chargers; this result left the door open for three opportunities. First, the victor in this game remains alive in the hunt for a wildcard spot; they would need the two teams in front of them to lose the remaining games but they still have a chance. The Patriots were placed in pole position for home field if they just sweep the rest of their games. The Kansas City Chiefs now also have a opportunity to win the division.

New England and Miami played gritty football in the first half, and then went back and forth in the second half. With four minutes left, the Patriots took a lead only to see it snatched from them by Ryan Tannehill leading the Dolphins to pay dirt with little over a minute left. What this did was put Miami in the sixth seed pending result of Monday Night Football. It also gave the Cincinnati Bengals a chance to take over the second seed.

Keeping up with the standard set by the top two seeds, Cincinnati also lost a game they were supposed to win. The Steelers spoiled their party and at the same time put the Bengals claim to the AFC North in doubt. This is because a Baltimore win would put them just one game behind Cincinnati with a season ending matchup left between the division rivals.

The Chiefs ended up winning their game over Oakland in spectacular fashion. The story of the game was JC Superstar's remarkable stat line of 215 yards from scrimmage on 16 touches and five touchdowns to go with it. Charles singlehandedly won fantasy football games for many a person. More importantly, they're tied for the best record in the AFC and could have home field advantage in the event Denver falters once more.

All of the NFC West teams came out with a victory on Sunday. Seattle made what they hope to be the first of two trips to Met Life Stadium and skunked the Giants. San Francisco made quick work of the Buccaneers and hold on to their wildcard spot. Arizona remains in the playoff race due to an overtime win at Tennessee. It's a shame that either the 49ers or Cardinals could possibly miss the playoffs. Even though St. Louis isn't in the running for the playoffs, they had perhaps the most impressive win of the division by defeating the NFC's number two seeded Saints.

New Orleans continues to look bad in road games, the loss to the Rams caused them to lose all equity they had built up in the NFC South over the Carolina Panthers. The Panthers defeated the New York Jets and put themselves into a tie with the Saints. The two face each other in week 16 for division supremacy.

The Philadelphia Eagles, leaders of the NFC East, went into Minnesota and got embarrassed by the Vikings minus Adrian Peterson. The Dallas Cowboys now had a chance to seize the division lead with a win over the Green Bay Packers but they blew a 23 point halftime lead aided in part by Tony Romo throwing interceptions on his final two drives when his team should have salted out the game by running. The Cowboys still have a chance to win their division due to their 4-0 NFC East record. Dallas and Philly play each other to close the season out.

The Packers, once thought to be out of the playoff race, now control their own destiny because they are only one half of a game behind the division leaders but need to win their final two games. The Chicago Bears made the switch back to a now healthy Jay Cutler won their game over the Cleveland Browns and also control their own destiny. The Packers and Bears play each other for the NFC North crown to end the season as long as they both win next week. This was all made possible by the outcome of Monday night's game. 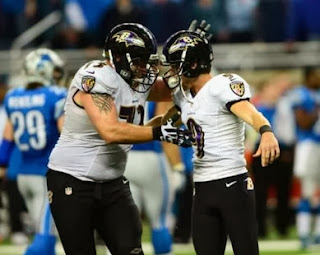 Baltimore Ravens went on the road to play the Detroit Lions Monday night in a game that both teams needed to win in order to keep their playoff position. The Ravens came out with the win mainly because they didn't turn the ball over and Detroit and intercepted Matthew Stafford three times. I've mentioned in the past that Detroit deserves to lose if they choose to not feature Reggie Bush as they did on the opening drive. They went away from Bush and their fate was sealed when Justin Tucker sent his sixth field goal though the uprights from 61 yards out. The Lions are now on the outside looking in, needing a loss from both the Packers and the Bears in the final two weeks. Baltimore, on the other hand, can win their division by winning their last two games. It won't be an easy task as they face New England this week and close at Cincinnati.
Posted by Darrel Wilson at 3:00 PM