Barring a meltdown, NFC championship contenders will have to deal with the 12th Man. 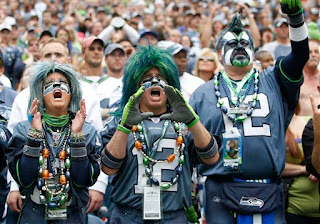 1.  Seattle  Dominant performance. With a 2 game gap, the NFC road to the Super Bowl officially runs through Seattle.

2.  New England  Not a pretty win but a letdown was expected and they got the job done. All they care about is the post season anyway.

3.  Carolina  They beat up a hot team and now play in a game that can possibly decide their division. This team is on the rise.

4.  Denver  Manning has so many weapons in his arsenal. The Titans aren't to be overlooked if Denver wants to maintain home field advantage.

5.  Cincinnati  Good defense and a mediocre offense. They always play to the level of their opponent.  The Indy game should be interesting.

6.  Indianapolis  Luck-ily for them they can lean on the big wins they racked up early in the season. The offense hasn't looked good at all.

7.  New Orleans  They got beat up in front of the entire school. The have a chance to redeem themselves against Carolina this week.

8.  Philadelphia  Chip Kelly has his offense rolling now. He's definitely climbing my charts and should be considered for Coach of the Year.

9.  San Francisco  They've been playing well against the scrubs of the league. We'll see if they can protect their house when the Seahawks come to town.


10.  Kansas City  Backing their way into the playoffs and the offense is now better than their defense. A loss this week should have them in panic mode.

Let me know what you think in the comments section.  Who got left out? What would you change?

Posted by Darrel Wilson at 6:00 PM