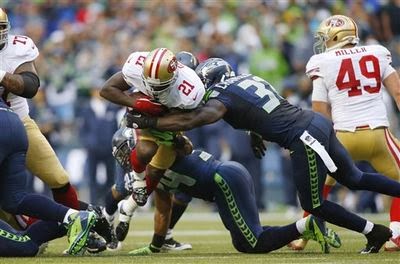 1.  Denver  400 yards and 4 touchdowns versus one of the better pass defenses in the league answered questions about Peyton's play in the cold.

2.  Seattle  Played a gritty game; this is what they do. Barely finished on the wrong side.

3.  New England  Got a lot of help from officials but always put themselves in position to succeed.

4.  Cincinnati  This was the week that the good Andy showed up.

5.  New Orleans  Redeemed themselves by being the first team to drop over 30 on Carolina.

6.  Carolina  Didn't have to win but needed to perform better for confidence. Rematch in two weeks.

7.  Philadelphia  Chip Kelly has five wins in a row and their schedule sets up nice for playoff trip.

8.  Kansas City  Put together a complete game for the first time in weeks.

9.  San Francisco  Huge win in a game versus division rivals that they had to have.


10. Baltimore  They're looking like they want a chance to defend their Super Bowl Title. They have a brutal finishing schedule.
Posted by Darrel Wilson at 3:21 PM