NFL Brain Dump: All About Luck

If we didn't learn anything from this past weekend of footballing, we were at least reminded that the games aren't decided on paper, the win has to be earned in between the lines.  Place kickers are often mocked for being lesser men or considered unimportant members of the team.  There also comes a point in time where things that we once perceived to be true have to be disregarded once the facts are eventually presented to us.  In this edition I’ll touch on these points but when it’s all said and done, maybe all that is needed is bit of luck. 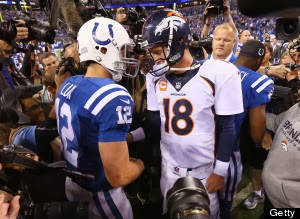 I don’t know of anybody who picked Peyton Manning to lose in his return to Indianapolis.  After an emotional tribute for the man that basically built Lucas Oil Stadium, a football game had to be played; and what a game it was.  It began for Indy the same way their defeat to San Diego left off with their first two drives not amounting to anything and their third getting bogged down in the red zone and settling for a field goal.  For Denver, it was business as usual with their second drive consisting of two completed passes to Eric Decker for an easy touchdown.  After that, the game turned into a microcosm of the transition that took place on the Colts’ team from Peyton to Andrew, it got real physical. Indy took control of the game and built what appeared to be an insurmountable 19 point lead. Then all of a sudden the explosive Broncos made a late comeback, breathing on the Colts goal line on the cusp of drawing within three until they handed the ball off to Ronnie Hillman and ran out of luck, or maybe it was just a case of Indy having the better Luck.

Whoever says that kickers aren’t physical or can’t do the same things as the other players need to ask Broncos’ punt returner, Trindon Holliday, how he feels about it after he got broke off by Pat McAfee, the Colts’ punter.  An argument can be made that place kickers face more scrutiny than any other position.  Four games were decided by a final minute made field goal; three of them the last play of the game.  Of the four, Nick Folk’s game winner for the Jets in overtime deserves the most attention because he missed an attempt just three plays before.  On that play the official flagged the Patriots and penalized them on a rule that had never been enforced before.  Many a time, the Patriots receive the benefit of favorable ruling, this time no such luck.

A narrative that has been circulating throughout the football blogosphere is that Kansas City is only succeeding due to the luck of the draw, that my friend is what you call perception.  The team that plays home games in Arrowhead Stadium is indeed the current Chief of the NFL, this is reality. (See what I did there?)  Kansas City is the first team to begin the season 7-0 after winning only 2 games the previous season.  While everybody else is waiting for them to lose, they just keep executing their game plan.  Does Alex Smith scare anybody?  No, he does the smart thing and plays to his strengths; he is considered the weakness of the team but does his job by keeping the chains moving and allowing the defense to rest.  This team plays field position football better than any team right now and keeps mistakes to a minimum.  When you do that and play hard for 60 minutes, you can manufacture your own good luck.
Posted by Darrel Wilson at 9:00 PM