I love watching football.  It isn't always about what plays are called, because sometimes passion is what ultimately decides the outcome.

The main thing that I took away from the epic Patriots versus Saints showdown is that Bill Belichick is still a better coach than you, me, Sean Payton, Rob Ryan or anyone else that loves football.  For the most part this season, the Saints have been taking what defenses give them, which have lead to Jimmy Graham taking a lot of yardage and dunking the football over crossbars.  In this game, Bill decided to play along and give Brees whatever he wants EXCEPT for passes to the elite tight end.  This was accomplished by having his best coverage defender shadow New Orleans’ best receiver, seems like a simple concept, it’s surprising that up until now no other coordinator employed this basic tactic which worked so well that Jimmy was held without a catch.  As well as “project shutdown Jimmy” worked, it still wasn’t enough to win the game; the game was decided by heart, mind control, and clutch plays. 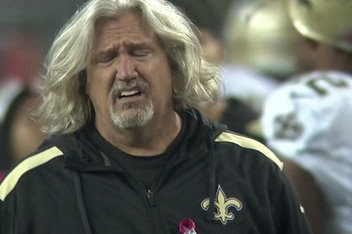 First, let’s talk about heart. Down by a single point, less than 3 minutes left on the clock and faced with a 4th down, having all 3 timeouts in tow, the hooded one decides to go for it.  Although New England didn’t convert, they displayed heart when they could’ve punted.  From the New Orleans side of things on the losing drive, defensive coordinator Rob Ryan, went away from his strategy of pressuring Tom Brady, which had been working for him all game.  Instead, Ryan was afraid to get beat deep and went into Tampa 2 shell, exhibiting a lack of heart.

Let’s evaluate mind control, shall we?  On the aforementioned failed 4th down conversion, Belichick instilled confidence in his players by going for it in a dire situation, letting them know that he trusts Brady and the offense to go out and win the game; it’s understated how much having confidence means in between the lines.  At the same time, a message was sent to the opponent that the defense hasn’t showed enough to deserve respect and it doesn’t matter how close you are to our end zone, our guys will hold you to a field goal, which they did.  With a four point lead, after intercepting Brady on the very next possession, Sean Payton failed miserably in his play calling while attempting to grind out the clock.  Uncharacteristically overly conservative, he called a play for Drew Brees on 3rd down to roll out to the left and give himself up to use time instead of trying to convert.  His mind must have been playing tricks on him.

We saw two polar opposites in terms of clutch execution.  With two opportunities to put the game away, the Saints failed to get first downs, or should I say the Patriots defense came up big when they needed to get the ball back.  You already know how this game ended so I’ll spare you the details of how Tom terrific masterfully picked Rob Ryan’s prevent defense apart.  I do want to mention a significant play in that drive; faced with another 4th down, Brady completed a pass to a player that was signed off the street shortly before the game.  Talk about moxy!!!

The Patriots’ players are dropping like flies but none of this seems to mean anything to anybody affiliated with that franchise.  We can talk about Peyton Manning and all the offensive records his team is breaking.  We can talk about Andy Reid’s team being powered by an elite defense.  While everybody is paying attention to the undefeated teams, the rest of the AFC needs to keep in mind that a trip to the ship usually involves defeating New England.


The Packers lost Randall Cobb for a stretch; he’ll be out a couple of months… The Cowboys lost DeMarco Murray, who had been running well for them… Nick Foles is playing quarterback for the Eagles like he’s supposed to be the man, sparking a quarterback controversy… I learned that it doesn’t matter who plays quarterback for the Texans, they have to throw a requisite pick six… The NFC West doesn’t have a team under .500; they are who we thought they were…  Playing quarterback in Buffalo appears to be a work hazard; I hear Shane Falco is getting a look… The Steelers finally got their first win… The Bucs, Jaguars and Giants still haven’t and probably should be mentioned in contraction discussions…The NFL makes 45% off cancer merchandise, the Cancer Foundation gets 3%...   Brandon Marshall was fined $10,500 by the NFL for wearing green cleats in an effort to promote Mental Awareness week.  I would think the NFL would stand behind this cause, maybe they will once they figure out how to profit from it first.

Until the next time my cerebral spinal fluid leaks on your screen…
Posted by Darrel Wilson at 11:06 PM