Keith Bogans was implanted as a starter from the day he set his feet in Lexington.  He made the SEC All-Freshman team in 2000. The 2000/01 season was his best individually when he averaged almost 18 ppg and NBA draft experts had him pegged as a potential lottery pick.  He decided to stay for four years, and in his senior season, he lead the Wildcats to an undefeated conference slate; they also finished the regular season ranked on top of the AP polls.  That team was nicknamed the "Suffocats" for the way that their defense suffocated opponents. There was high National Championship hopes for the Big Blue Nation but tragedy struck as Bogans suffered a high ankle sprain in the sweet 16 win over Wisconsin.  Bogans made a valiant effort to try to lead his team to victory over Marquette two days later but it was all for not as Dwyane Wade ripped his one-legged defender apart for a 29 point triple double.

The downside to a player staying in college for their full eligibility is the perception that a player has reached his ceiling.  The notion is that if he was good enough to play in the NBA, he would have left early.  Bogans was drafted by the Milwaukee Bucks in the 2nd round with the 43rd pick and traded later that day to the Orlando Magic. He started 36 games in his rookie season.

At the start of the 2004/05 season Bogans was traded to the Charlotte Bobcats.  Changing teams became the theme of his career as he played for nine NBA teams.  The best individual stretch of his career came when Charlotte traded him to the Houston Rockets for the 2nd half of the 2005/06 season as he had career highs across in every category except for shooting percentages. 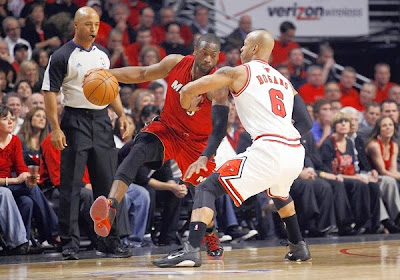 He is mostly known as a physical perimeter defender. The Chicago Bulls recognized this as he started in all 82 games of the 2010/11 season.  It's not a coincidence that Chicago advanced to the Eastern Conference Finals that year with him as a starter.

Keith is currently on the Boston Celtics roster. It won't surprise if he is traded at some point during the season to a contending team that is looking for a defensive stalwart.
Posted by Darrel Wilson at 3:57 PM