The Carolina Panthers are now seen by many as legit Super Bowl contenders. If you've been reading this column regularly, you know that I was high on them when they were a 1-3 team; they just caught some really bad breaks early in the season. Pat on my back out of the way, most of America just witnessed last Monday night why I was so high on them.


Carolina has a tough defensive unit to contend with. In the trenches, Charles Johnson and Greg Hardy gets most of the attention because quarterback sacks are sexy plays. They are who they are because of rookie tackle, Star Lotulelei, eating up the blocks and allowing the linebackers to make plays.  As far as the linebacking core, Jon Gruden couldn't stop gushing over Luke Kuechly during the broadcast; and for very good reason. The linebackers do a great job of making sound tackles; all that underneath stuff that Tom Brady loves stayed underneath. The front seven is considered the best in the NFL but the secondary probably doesn't get the credit they deserve because they don't gamble for interceptions or make big hits; they're just very disciplined. 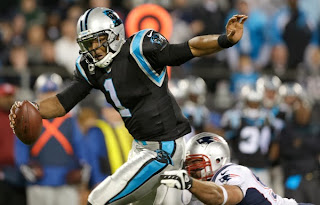 I listed my top five MVP candidates last week, maybe it's time for Cam Newton to start getting some run in the MVP discussion. Why not? Is it because he doesn't post gaudy stats? This reminds me of the season that Steve McNair tied Peyton Manning for MVP honors. All Newton does is put his team in a position to succeed, and unlike some game managers, he makes big plays along the way. The final drive, en route to a win over New England, is the signature moment of his young career so far. He lead the offense on a 13 play drive, eating up 83 yards along the way before Ted Ginn dove into the end zone. Anyway, the resume will just continue to grow.  Nothing is a foregone conclusion but Carolina should be 9-3 when they meet up with New Orleans for the first time this season.

Don't look now, but after starting the season 0-6, the New York football Giants are in position to make the playoffs. You can trace their success to the last time they lost this season. In that game versus the Bears, coach Coughlin leaned heavily on his defense and found a ground game; they've been cooking with the same ingredients ever since.  I don't think they'll make the playoffs, although they have some very winnable games ahead of them.

I think Chip Kelly has figured this NFL thing out a little bit.  Most people think of him as a guy that loves to run the ball a bunch of times; and do so at a rapid pace.  The thing that gets overlooked is that his Oregon teams routinely were among the best in turnover differential.  Since Nick Foles has taken over at quarterback, he's thrown 16 touchdowns without an interception. I love Mike Vick but it would be a huge mistake to make the switch back to him when they come off their week 12 bye.

Week 12 looks like it's going to be a pretty dry slate. Here are a few games to get excited over though:

Until the next time my cerebral spinal fluid leaks on your screen...

Posted by Darrel Wilson at 3:00 PM