Tayshaun Prince arrived in Lexington the year after Tubby Smith's first Big Blue squad cut the nets down. He was the first of Tubby's small handful of blue chippers that played in Rupp Arena.  He never turned out to be what most of Kentucky fans were used to seeing from top flight recruits.  What he did become was the exact type of basketball player that Tubby wanted for his system.  In his junior year, he garnered SEC Conference Player Of the Year honors.  His gritty play on defense and intelligent play on offense carried over to a lucrative professional career.

The Detroit Pistons selected Tayshaun Prince with the 23rd pick in the 2002 NBA Draft.  He was a seldom used reserve in his rookie season for Coach Rick Carlisle.  However, his time to shine came in the 2002/03 playoffs.  After going up 3-1 in the first round, Orlando's Tracy McGrady made his infamous proclamation,"It finally feels good to get in the second round".  Coach Carlisle, out of desperation, inserted the lanky Prince to guard T-Mac and Detroit wound up winning the series.


The next season Larry Brown was hired as coach and Tayshaun's spot in the starting lineup was cemented. In the Eastern Conference Finals of that season, Tayshaun made the signature play of his career (shown in the above video) en route to helping his team advance to the NBA Finals versus the Lakers.  Tayshaun was assigned the difficult task of defending Kobe Bryant in the finals and shocked almost everybody by locking Kobe down as Detroit upset Los Angeles to win the championship. However, it wasn't surprise to the Big Blue Nation, who were aware of his defensive pedigree. 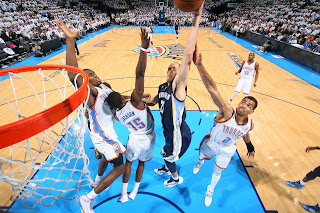 Throughout his NBA career, Tayshaun was never known to excel at anything in particular except for being a consummate professional.  He is neither athletic or a great shooter but has displayed a fundamental understanding of the game.  His high basketball IQ is part of the reason The Memphis Grizzlies made a mid-season trade for him last season to help them make a deep playoff run.