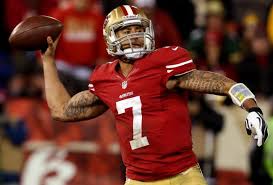 You know what to expect when you see the 49ers play, a brand of power football that was carved out by former coach Mike Singletary and has been enhanced by Jim Harbaugh. They only sign big players that hit hard on both sides of the ball. This is truly a team with an old school mentality.  How does all of this help your Paper Pigskin team?


QB:  You never know exactly how the game plan is going to go from day to day. Harbaugh and Greg Roman employ a conservative game plan when it comes to passing; given the choice they will run it every down if they keep moving the chains. The good thing for Colin Kaepernick is he gets to run it quite frequently too, and he runs very well. The ability to run is a plus in all scoring formats. When a passing play is called, he displays one of the strongest arms in the league. Even if you're not wowed by his arm, dual threats are always good money because rushing yards give them a higher floor He's good money at his QB12 ADP.

RB:  For the last few years, all fantasy pundits have been waiting on Frank Gore to fall to the wayside but he continues to perform. Gore is a solid low-end RB2, and you can get him as late as the 7th round. However, he won't have many big games because the coaching staff keeps him on a "pitch count" to keep him fresh. If you're looking for a high floor/low ceiling guy, he's your man at RB20.

Carlos Hyde is not a bad guy to add to your team for running back depth. He's going to get his fair share of touches in this run first offense. I can imagine that if the Niners have nice lead late in games, he'll be the one getting carries to salt the game out in order to preserve Frank Gore. Now if Gore happens to go down with an injury, Hyde will have monster fantasy outputs the rest of the way due to the lack of health down the depth chart. The Hyde hype is high, going at RB38 for a handcuff.

WR:  Michael Crabtree is Kaepernick's favorite target when he's healthy enough to play. When Crabtree is on the field, he racks up catches and produces numbers of a top 10 WR. This will be the first season that Crabtree starts completely healthy with Kaepernick as his quarterback; the two have connected for just above five completions per game, that projects to about 90 for the season. There isn't team I dislike more than the 49ers, but Crabtree is a high value draft selection at WR19.

Anquan Boldin has been a reliable receiver at every stop of his NFL career. Last season was no different, he quietly had 85 receptions for 1179 yards and 7 touchdowns; easily good for a WR2 status overall.  Boldin is a player that is well-conditioned, so I don't expect him to decline just because he'll be playing this season at 34 years old.  Many are overlooking him in drafts because of the run-first system and the Colin/Crabtree love affair. Q is a good deal at his ADP price of WR40.

TE:  Vernon Davis is a physical specimen, it's almost unfair for him to play this position. Unlike Jimmy Graham, not only is he too big for most cornerbacks to cover, but he can out run most of them also. The problem is that he is such a great blocker that he doesn't get sent out to exploit the secondary as often as he should.  It frustrates owners sometimes because, he can be subjected to games where he produces two or fewer receptions. He's generally one of the first that is selected at his position, but TE4 is a little too rich for me.

Def:  This defense has lost so many pro bowlers due to free agency and suspension. They're still being drafted as a top 2 unit as if most people aren't aware of this.

Posted by Darrel Wilson at 5:26 PM