This team was making strides offensively early last season, then an interesting happened, Sam Bradford got injured. After losing their starting quarterback, the team had to rely on their defense and special teams to stay competitive because not much was going right on offense.

QB:  Once again, Bradford is out for the season with an ACL injury, this time before the regular season starts. It's a shame because he'd been shooting laser beams.  Shaun Hill steps in for him, before you write him off, he's actually had a much more productive career than Bradford has; in 34 games, Hill has completed 62% compared to Bradford's 59%, has a 41/23 td/int ratio compared to Bradford's 59/38 in 49 games. If this team plans on winning they'll have to throw it some, and he appears capable. 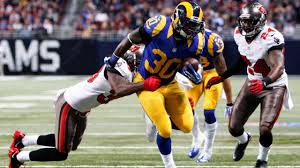 RB:  The injury bug for the Rams actually struck the running back position first. Zac Stacy began the season on the bottom of the depth chart, then the starter was injured and Stacy was given a shot in the 5th game of the season and he toted the rock 250 times in 12 games. He isn't anything spectacular but as I mentioned before, there's nothing more important than opportunity as far as fantasy football is concerned.  St. Louis have given others chances to take his spot but it turns out, he of the 3.9 ypc last season, is the best they have and he's going to get a heavy workload this season. His ADP is RB14, if you're lucky enough to get him in the 3rd round, go for it.

Others in the mix are Benny Cunningham, who  ran with the first team in the dress rehearsal, and rookie Tre Mason. Cunningham playing in the dress rehearsal signifies to me that this team is going to run early and often and he'll probably be in line for close to 10 carries a game. At RB72, most are ignoring him, snatch him up in a deep league. Mason isn't ready yet because  of issues with pass protection.

WR:  Bradford's injury helps Tavon Austin more than it hurts him. This offense is in desperate need of big plays, and the 8th pick of the 2013 draft is a burner that can provide this.  He's the definition of a post-hype sleeper, everybody was talking about him last season. If the team trusts Hill enough to use more three-wide sets, Austin will kill from the slot. At WR49, I'd advise drafting him as the 4th or lower WR on your Paper Pigskin team that you don't have to depend on, then he just might blow up for you. Hr's also valuable in return yardage leagues.

Kenny Britt had been running as a starter for the Rams in the preseason, and has impressed coaches with his athleticism and leadership. Britt has always had the natural talent to be one of the best wide receivers in the game today. Injuries and inconsistencies have held him back, unfortunately he had developed chemistry with Bradford not Hill, and this might hold him back. At WR72, the reward far outweighs the risk.

Brian Quick is the WR1 on this team. Nobody is talking about him in fantasy circles, but all summer the coaches and his quarterbacks have been. He's not even being drafted in most leagues because he doesn't possess the flash that requires attention.  After all, he has to be listed on top of the depth chart for some reason. Quick is a true fantasy zombie, a guy that will help some win their league.

TE:  Jared Cook has been such a disappointment in fantasy football. He blew up on opening day last season and did diddly squat the rest of the way. He possesses big play ability but is far too inconsistent to be trusted.  His ADP of WR29 reflects trust others have as well.


Def:  This unit has arguably the best defensive line in football. Jeff Fisher is a defensive minded coach and Greg Williams is one of the best coordinators in the league.  They should be one of the first selected.
Posted by Darrel Wilson at 4:52 PM