If you're not familiar with my writing, when you see "Paper Pigskin Point Potential", I'm referring to FANTASY FOOTBALL.  Real cute, but I'm hoping it will stick and when it does, remember who coined the phrase.

Everybody always wants to know which guy they should put into their fantasy football lineup.  Generally, if you draft someone via a high pick, you want them to be your lead dog to just plug in and leave them in. However, there are some cases that you might want to avoid an elite defense that will give you trouble; the same thing goes for wanting to exploit a terrible defense. I don't subscribe to the "Never sit your studs" philosophy. Draft well, do the work, and exploit plus matchups. 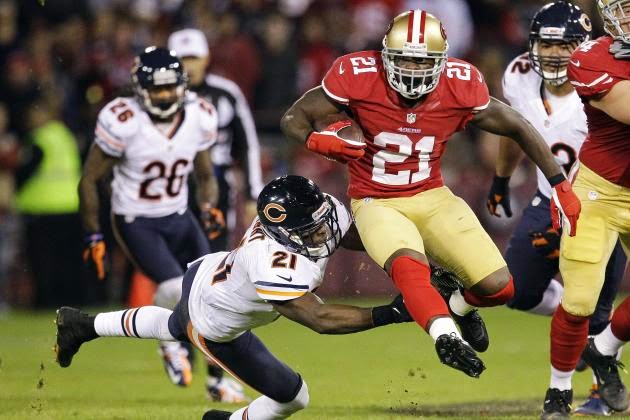 What you won't find in this column are obvious players to start. You will see borderline guys who you're likely to consider leaving on your bench who I feel should produce solid stats for the upcoming week.

Frank Gore - San Francisco was gifted a head start in Dallas because of early turnovers and great field position; the game plan had already been dumbed down after an early lead and the Cowboys knew what was coming. This week, the Niners are going to impose their will on the ground vs. a Bears defense that gave up 193 combined yards on the ground to Buffalo; Gore will get the call early and often.

Justin Hunter - Ken Whisenhunt likes to stretch the field vertically, and Justin Hunter is the guy that gets called upon to do so. The Cowboys defense is all kinds of bad, Tennessee is going to pound the rock early and often to suck the safeties in, and then Hunter is going to kill them over the top for some big plays.

Andy Dalton - Some people dismiss this guy as a fraud because of the post season short comings but that doesn't have anything to do with the fact that they'll be involved in a shootout vs. the Falcons.  Dalton has improved as a passer and performs well versus subpar defenses like Atlanta's. Get this guy in your lineup.

As I stated with my Starts, you won't find obvious players that you drafted in late rounds. These are bold choices that would have you questioning me but glad that you made the choice at the end.

Victor Cruz - This guy hasn't been able to do the Salsa after a touchdown in eleven straight games. The New York Giants' offense is looking very ordinary right now and it doesn't help that he'll likely be matched up against the leader of "The No Fly Zone".

Trent Richardson - Cut the rope on this guy already.  Indianapolis is having all kinds of struggles opening up running lanes for their running backs. NFC East defenses are trash for the most part but the Eagles have fairly decent run defenses. Andrew Luck is going to drop back and fling it a lot, and when he does Richardson won't be involved.

Jay Cutler - I actually love Jay Cutler this season in general, but they've suffered injuries on the offensive line in addition to their big play guys on the outside - Brandon Marshall and Alshon Jefferey - going into this game with health question marks.  Cutler has also thrown for 300 passing yards once in his last 26 road games.

Risky Move
Eddie Lacy should be play this week after completing the mandated concussion protocol, but if you're loaded at RB, bench him. I'm not messing the Jets run defense right now, Green Bay should shred them in the air though.

If you're desperate for a Tight End play, give the Giants' Larry Donnell a shot.  Arizona's defense has been a gift to this position in fantasy football.

If you're looking to capitalize on Tony Romo's ills of last week by starting the Tennessee defense, think twice about it. Last week for Romo was historically bad; I expect big things from him and Dez Bryant this season.