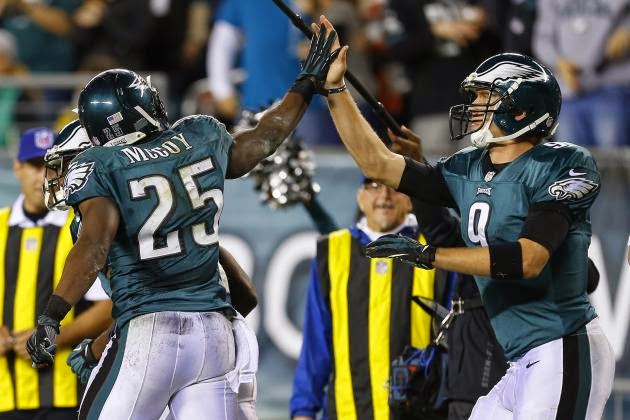 Chip Kelly ran the fastest offense in the league last season, getting off a play every 24 seconds. They also were last in the league in time of possession at 26 minutes 19 seconds per game. But most importantly were their 65.4 plays ran per game was food for 12th in the league. When Kelly took over the Eagles last season, he had players that were conditioned to Andy Reid's West Coast system, so he relied heavily on LeSean McCoy and schemed up plays to get Nick Foles comfortable; this meant featuring Desean Jackson and Riley Cooper. One summer later, a different cast of characters have been added to the lineup; guys that are more suited for his style of plays. QB:  There's no way Nick Foles can put on a repeat performance from last season; he threw 19 touchdowns last season before his first intercepted pass, finishing with a 27-2 ratio. He was very efficient and made the most out of his throws, leading the league in both Air Yards Per Attempt and Deep Pass Percentage. Even though I believe there will be a slight regression, this system encourages ball protection in order to maximize their scoring opportunities; this is definitely great for your Paper Pigskin team. 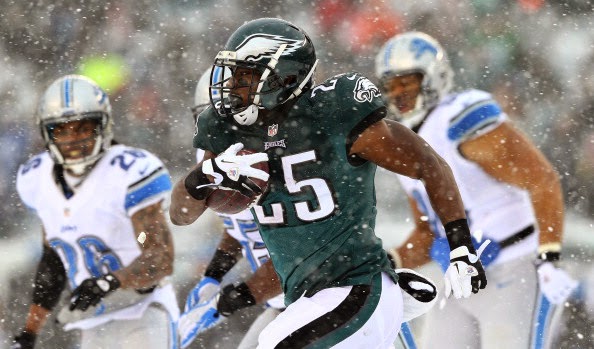 RB:  I'll keep this one simple, Shady McCoy led all running backs in yards from scrimmage last season, the only thing missing were the touchdowns. Shady made headlines in the summer by proclaiming himself the best running back in the game, playing for Kelly, he'll have plenty of opportunities to validate that statement. The Eagles will employ more physical players in their formations than last year that will improve run blocking. I don't foresee the addition of Darren Sproles to the mix being a detriment to his fantasy points; he might be less involved in the passing but the touchdowns should increase.

Sproles is made for this offense, coach Kelly himself joked that "anybody with a fantasy football team would have jumped at the chance to acquire [Sproles]." He'll be lined up all over the field and used in various different ways. He's surely deserving of a starting flex spot in your lineup.

WR:  Riley Cooper is the leading returning wide receiver from last season. If you want to talk about making the best of opportunities, Cooper finished in the top 25 at this position with only 47 receptions. If he can improve on the 57% catch rate, he'll be a safe choice for a WR2 at his ADP of WR38. 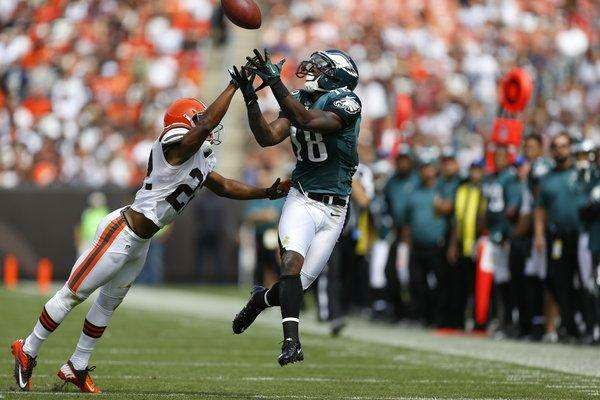 I don't trust that Jeremy Maclin will survive this season unscathed. After missing last season with a torn ACL, he's been nicked up with various other leg ailments. He's slated to be the go to guy in the intermediate areas; he can have a huge year if he remains healthy. This is clearly a high risk /high reward situation at WR28 . . . Rookie Jordan Matthews gets the nod in the slot to begin the season but his role can easily increase as he learns the nuances of the professional game. However, he is low in the pecking order, but worth a late round flyer.

TE:  Both Brent Celek and Zach Ertz are worthy of being rostered. Ertz is the sexy name buzzing around fantasy circles and has drawn comparisons to Rob Gronkowski from his own quarterback who played with The Gronk in college. Keep in mind that Ertz is actually the TE2 on this roster as Chip Kelly values blocking ability for the run game more than anything which would place Celek on the field for more snaps than his younger teammate. Due to his superior athleticism, Ertz will be a frequent target in the red zone. The buzz has Ertz planted on the starter bubble with a TE12 ADP while Celek can be had 10 slots later.

Def:  Their defense spent a lot of time on the field last season and will do the same this season while involved in plenty of shoot outs.