You think all types of bad things when it comes to the Raiders: bad stadium situation, bad performances, and bad luck. At least their fan base is bad ass though. GM Reggie McKenzie has worked tirelessly to change the culture by making personnel moves in efforts to alter the way the team is viewed. As far as the product on the field, the defense is coming along nicely but the offense is inconsistent and still all kinds of bad.  At least they’ve been able to run the ball well, which is always a solid foundation to build on.


QB:  Matt Schaub was supposed to be primed for a comeback-player-of-the-year-type season, however it seems like the two youngsters he should be mentoring him are out performing him. I’m not buying the elbow issue as an excuse for bad play. He was brought in to be a bridge until the kids were ready but like BDP said, “The Bridge is over, the Bridge is over.” 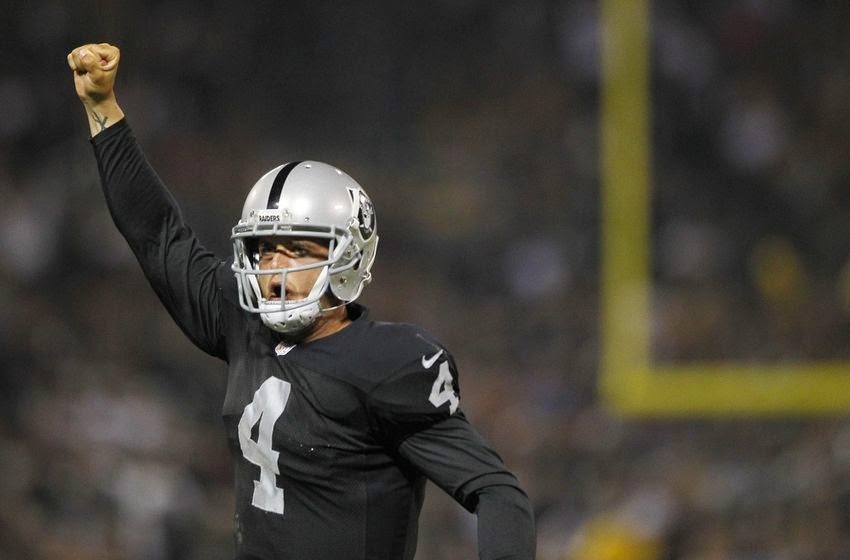 Derek Carr is the truth, the fastest way to move the ball from point A to B is via the cannon that is called Carr’s right arm. Carr is a player that should be drafted as a high priority in dynasty leagues. That being said, rookie quarterbacks have to show me they can perform when it counts before I suggest them owned in a re-draft league.

RB: This backfield looks to be in a time-share; both veterans toting the rock should have success because this is one of the better run-blocking offensive lines in the league. Maurice Jones-Drew is still a solid back that rarely gets tackled for a loss, can make his reads and run for big yardage.  You’ll be happy getting MJD at his RB29 ADP; his blocking situation is real upgrade over what he’s dealt with over the years, plus he’s a good receiver. 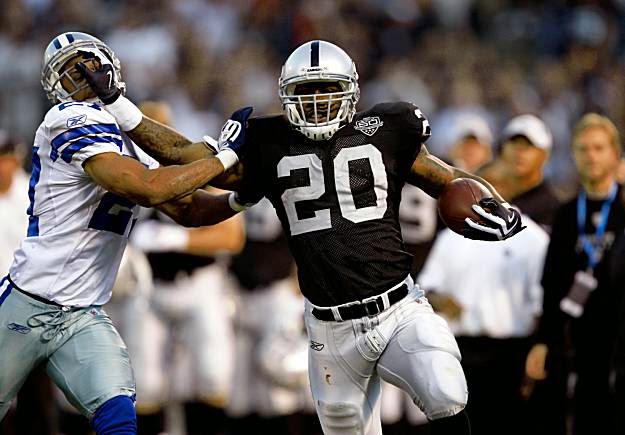 Darren McFadden has explosion written all over him, but those that have had him on their Paper Pigskin team over the years will read that as implosion. Run DMC looked good in the preseason, and maybe the low usage this season will keep him fresh enough to produce for all 16 games. You must draft him in deeper leagues; it will also be wise to use him as a handcuff if you draft MJD. His ADP is RB47.

Latavius Murray is a name floating around fantasy football circles; for good reason too. He’s 6’3”, 225 lbs, and runs a 4.38 40, the logic behind his hype is that injury higher on the depth chart is inevitable. Draft and stash in dynasty leagues ... Then we have the Pro Bowl fullback Marcel Reece, who has slimmed down and appears quicker than ever.  It would be wise to use him in two tight end sets as the move tight end so the team can maximize his talents, he used to be a collegiate wide receiver, but Greg Olson isn’t that creative.

WR:  James Jones was signed in the off season to be the guy; obviously McKenzie believes he can be a factor after seeing him first hand from the Packers’ front office. He was a red-zone threat in Green Bay, and those opportunities are important for fantasy football. He’s worth a flier at WR56… Rod Streater is the most polished of this WR group but is nothing more than a possession receiver. His main value is in PPR leagues, as he should be a consistent underneath target for whoever is the quarterback; ADP is WR73… Denarius Moore is the most talented out of the bunch but his inconsistencies have been his downfall. He is sure to pop off for a big game, but when you run to the waiver wire to claim him, he will disappoint afterwards… Andre Holmes has exceeded expectations as a big and physical receiver but still needs experience. I liked the noise he made down the stretch last season, and apparently so did the Raiders, as he was on top of the depth chart to open camp but has since been outplayed by the veterans. He should be drafted in dynasty leagues and put on the watch list in others.

TE:  Mychal Rivera is the guy here, but it’s only by default due to injuries.  Look away.

Def:  This is an improved unit that has some early opportunities for use due to bye weeks.

Posted by Darrel Wilson at 9:30 AM