The Dolphins offense, last season, was the closest you can get to no frills in the NFL.  Former Offensive Coordinator Mike Sherman lined players up in the same position every time and made it predictable for defenses. Replacing Sherman, is Bill Lazor, who was the quarterbacks coach for the Eagles' innovative system. Look for the tempo to be picked up and more offensive plays ran through the course of a game.


QB:  OC Bill Lazor admitted that he had been coaching Ryan Tannehill especially hard in camp. The coaching staff  has worked on tweaking Tannehill's footwork during training camp in order to improve his accuracy, according to offensive coordinator Bill Lazor; footwork is the key to everything as a quarterback. Tannehill is getting the ball out faster and has seen his velocity spike.   Lazor wants Tannehill to use his athleticism more to give the offense as many looks as possible. The stage is set for a potential breakout season. Tannehill is one of my sleepers at QB21 ADP.

RB:  Lamar Miller was expected to breakout last season but instead was a disappointment to the Dolphins as well as anyone who had him on their Paper Pigskin roster. This season, there's hope that Miller can play the "Shady McCoy role" in Lazor's offense.  The speed is definitely there but not the shiftiness. I'm not sure how long the leash is on Miller as the Dolphins forked up some cash to sign a free agent running back. His ADP is RB33, it's likely a timeshare here so I'll pass, but he has tremendous upside.

Knowshon Moreno showed that he's a complete back caddying for Peyton Manning last season. He could win the starting running back spot over Miller early in the season; if Miller comes up lame again, the Dolphins could turn to the veteran. Moreno did the same thing last year in Denver, he was only released because a 1st rounder was used on Montee Ball and they didn't want to pay both players. Moreno's ADP is RB36, caution should be taken because he's not the starter yet but could pay dividends for those that take the risk. 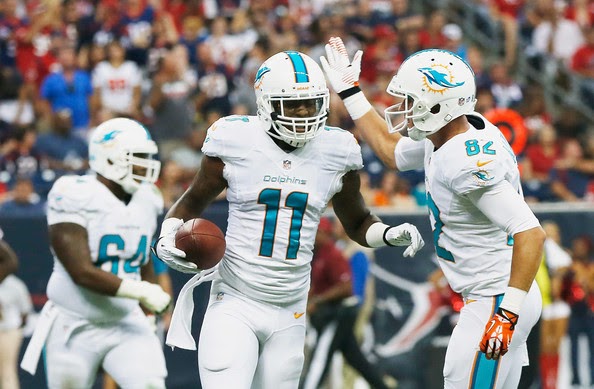 WR:  Mike Wallace needs to produce in a big way for the Dolphins this year; Miami opened their wallets for him to be their #1 guy and he didn't even lead the team in any receiving categories.   Lazor won't let Wallace's $60 million talent go to waste this year, he's playing the DeSean Jackson role in the Bill Lazor offense.  D-Jax just posted a career-best year via creative scheming that raised his catch rate; Wallace is a player of similar ilk.  His current ADP is WR30, if he produces anything close to what Jackson did in Philly last year, you'll be happy with that value.

Brian Hartline is one of the most underrated wide receivers in this league, period, much-less fantasy football.  Hartline has revealed himself as the personification of consistency over the last two seasons, finishing 2012 with 74 catches for 1,083 and 2013 with 76 catches for 1016 yards; leading the team in both categories last season. Continuing with the Philadelphia comparison, he's a much more polished wideout than Riley Cooper is and we see how Cooper popped off as a top 20 WR last season. His ADP is 28 spots lower than his teammate that he out performed last season. Go figure.

TE:  Charles Clay lined up as a blocking fullback, in the slot, and even got goal line carries as a tailback last season; he's just the type of player that we've become accustomed to seeing in the variety arts offense Miami will run this year. Clay led the team in touchdown receptions last season, he'll get plenty of opportunities to break free in this scheme. His going rate is TE14, that's a good value due to the usage I'm expecting from him.

Def:  If you're streaming defenses, Miami faces three mediocre offenses from weeks 2 through 4.

Posted by Darrel Wilson at 5:54 PM