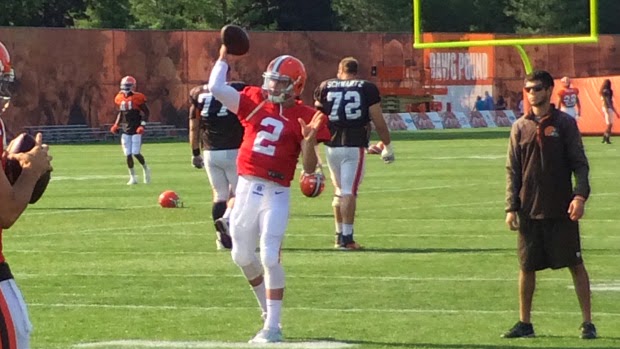 Johnny Manziel is all people want to talk about when the Cleveland Browns are brought up. For fantasy football purposes, the name you need to know is Kyle Shanahan. His offenses typically run the ball fairly well while employing a zone blocking scheme. The normal sets use double tights quarterback bootlegs are a staple of his system; usually only one wide receiver is eating the pigskin as the others are fighting for scraps. Cleveland's offense led the NFL in percentage of pass plays called in 2013. It'll be quite the contrast this time around.


QB: As of this writing, the quarterback battle is still ongoing, but we can still forecast the point potential of both candidates. With Brian Hoyer, we can view his two-game sample from last season where he played tough defenses and averaged 295 yards and completed 60%.  However, under Shanahan, I envision him more like a 2012 Matt Schaub (4000 yds, 22 td,12 int on 64%); not as efficient because of inexperience though. I'm not drafting Hoyer because even if he does win the job, Johnny is lurking; however, if the team is winning, he can make a good waiver wire pickup. Manziel can be a combination of Schaub, and since he's athletic, last year's version of RG3 - you know the one that played below expectations partly because he wasn't at full strength. He's the better fantasy choice because of his running ability, Shanahan will use the read-option so that he is comfortable. Johnny Football's ADP is QB18, too early in redraft leagues for a guy who hasn't won the gig, but a bargain for dynasty leagues.


RB:  Ben Tate was being coveted by the Browns even before he was a free agent, he became even a better fit when Shanahan was named OC due to his familiarity with the offense. If he's going to get the bulk of the carries, his RB25 price is a steal. That said, I'm truly concerned about his injury history, which means I'm looking in Terrance West's direction. West is a big back that scored 41 touchdowns in lower division college football and was clocked at 4.54 in the 40 at the combine. His ADP is RB39, if you want upside in your players, snag him like 6 spots higher.

WR:  Last year in this column, I anointed Josh Gordon as a breakout player, he led the NFL in receiving awards in only 14 games, then commenced to breakout some blunts and now faces a lengthy suspension. If he's lucky enough to miss the entire season, he'll provide good value anywhere after WR1 range, exactly when to draft him will depend on how many games. The #1 option in Shanahan's offense averaged 1,197.5 yards per season, the second wideout 662.3. Whoever wins the top spot among Miles Austin and Andrew Hawkins appears worthy of a top 20 WR selection if the trend holds true to form.

TE:  I also touted Jordan Cameron as a sleeper last season, I played in four money leagues and owned Cameron in two and Julius Thomas in the other two. I don't expect Cameron to duplicate last season's numbers. I've seen people say he's the 3rd or 4th best at the position this season because the Browns will have no better receiving option, but I'm just not buying it. The TE lover, Norv Turner, is no longer in town. I'll be the first to say I'm wrong if he turns out to post Shannon Sharpe numbers. His ADP is TE6, I have 10 players rated higher at the position this season.

DEF:  They were an underrated fantasy unit last season, they sport one of the better secondaries in the league. If all goes according to plan with the run game, they should be rested to attack. Draft them with confidence.
Posted by Darrel Wilson at 8:00 PM