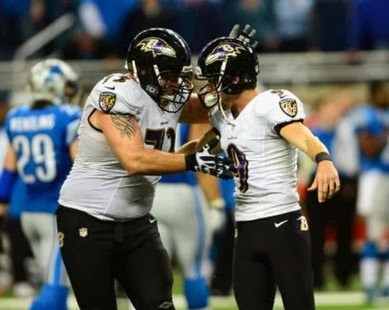 The first commandment of new Offensive Coordinator Gary Kubiak’s scheme is “Thou Shalt Run It.”  The premise of this offensive system is designed to open backside cut lanes for the running backs; those same running plays set-up bootleg action for the quarterback.  This was one of the worst teams in the league as far as total offense, with very few players that could help your Paper Pigskin team. Something fresh should help change that because in his previous coaching stops, Kubiak had his teams finish in the top-8 in total offense 15 of 19 seasons.

QB:  Joe Flacco had his worst season as a pro last season, throwing 22 interceptions to 19 touchdowns. With more experience at receiver and a healthy Dennis Pitta, Flacco should be able to bounce back and be much more efficient under Kubiak. If Matt Schaub can have standout seasons running this offense with few receiving options, why can't a Super Bowl winning quarterback do the same with more? I'm expecting Flacco to have his first 4,000 yard season and cut down on all the picks. His ADP is QB18, which is just about right for the slightly better than average Joe.

RB:   Ray Rice showed nice acceleration and decisiveness on his runs during the preseason games, something we didn’t see from him last year due to his conditioning.  Rice says, “I feel like back when I was a rookie. That's the weight I'm continuing to try to play at.” 2013 was the worst performance of his career when he produced a paltry 3.1 yards per carry.  Even if he is improved, he’ll miss the first two games of the season due to suspension. He could be a possible bargain at his RB26 ADP, but it’s risky because the job isn’t guaranteed upon his return.

Bernard Pierce fell off last season, his 2.9 yards per carry showed he was equally as terrible as the guy ahead of him on the depth chart. However, he has an opportunity to be the head Raven in charge of the backfield. Pierce possesses ability to cut and accelerate up field that is better suited for the Kubiak zone-blocking system.  He’ll get his fair share of carries early that warrants his RB40 ADP

WR:  Torrey Smith felt the effects of being the sole legit receiving threat on the Ravens last season as he saw his touchdown total cut in half from the previous season, even with a career high in targets.  He is one of the preeminent deep threats in the NFL; Smith was targeted on deep routes more than any other fantasy relevant wide receiver last season. His catch rate was a subpar 47% overall, so if he can improve on that percentage with less double teams coming his way  because of the added help, he's a sure bet to climb from a #17 finish at his position into the top 10. His ADP is WR25, and I love that value. 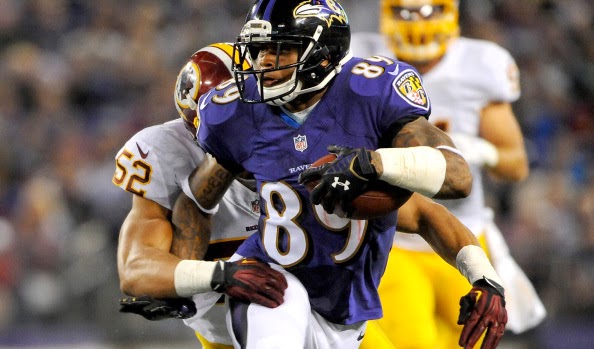 Steve Smith is the help I was referring to, he's been the #1 guy for many years, he now steps into his role as the supplementary dude.  Kubiak will now have the best #2 receiver that he's had since Ed McCaffery, and Smiff should have fun seeing less doubles as before.  Not many top corners can check Smiff one-on-one, now he'll get to burn teams' number twos. It'll all depend on Flacco, and signs are already there that these two have a solid connection.  WR51 is a bargain for a guy that can threaten the 1,000 yard plateau.  Marlon Brown finished last season with seven touchdown catches, which tied a Ravens rookie record and second to San Diego's Keenan Allen among NFL rookies; he did this mostly as the WR3 on this team, he'll like be # 4 this year behind Jacoby Jones.  I just mentioned the last two to illustrate the weapons Flacco has at his disposal this season.

TE:  Dennis Pitta Going to be fed the ball consistently in the short-intermediate game. His floor isn't that low at all because tight ends for Kubiak usually see above 25% of passing targets; I wouldn't be worried about Owen Daniels taking looks away. He and Flacco are bff's, so Joe feels confident that Pitta will be in the right place when he needs him; the misdirection in this system will often have him wide open. His ADP is TE8, he can break into top 5.

Def:  The Ravens have always had a defensive identity.  They were a decent starting unit last season. This season, they’ll be able to fair better if their offense gets into shape.
Posted by Darrel Wilson at 11:03 AM