Over the last three seasons, the Lions have been an offensive juggernaut, chewing up tons of real estate but coming up short when it became time to seal the deal.  For the most part, the only beneficiaries of this in Paper Pigskin have been Matthew Stafford and Megatron owners. Not much will be different this time around, except instead of the points being concentrated on the one skill position player, new offensive coordinator Joe Lombardi will distribute the wealth. Jim Caldwell is the new head coach; his reputation is of a coach that likes to minimize mistakes and place his team in the best position to succeed.


QB:  Many people speak of Sean Payton when the Saints are discussed but it should be noted that Joe Lombardi was Drew Brees’ quarterbacks coach for three of his four 5,000 yard passing seasons.  Brees has a career 66% completion percentage compared to Stafford’s 59.5%, and this is where Joe Lombardi should be able to help Stafford. Stafford also seems to have tunnel vision towards Megatron; Lombardi should help him spread the ball around much more effectively.  Last season, Brees completed 70 passes to four different receivers; Stafford has more weapons to throw to this season than he ever has. If the new coaching staff can improve his efficiency, we can be looking at a 5000 yard, 35 td, and less than 15 interceptions season.  Manning, Rodgers, and Brees are the consensus top three quarterbacks selected, he can put up numbers right there with those guys. 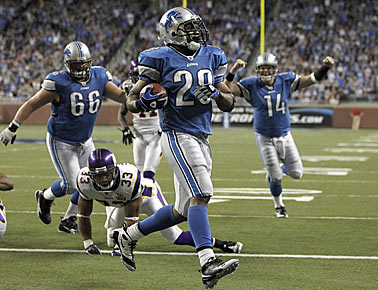 RB:  The backfield duo of Reggie Bush and Joique Bell both ate last season, especially in the receiving game, where both topped 50 catches and 500 yards; amazingly enough, the Saints combo of Sproles and Thomas bested those numbers with over 70 receptions each. According to Pro Football Focus, Bush ran 51 routes out of the slot last season and 37 routes while lined up out wide.  If the Saints’ offense is any indication, expect more of that this season because Darren Sproles ran 93 routes out of the slot and lined up out wide 27 times; Detroit have lacked WR threats behind Megatron for years. I bring up route running here because running backs such as Bush and Bell hold much more value in PPR leagues than the default rankings during your online draft reflect, therefore you need to reach a little higher than the standard ADP. Bush’s ADP is RB16.

Bell’s ADP is RB25, I really can’t argue with that price since he’ll be receiving the bulk of the goal line carries. Bell will likely have another season with over 50 receptions, which will make the third straight year to start his career. 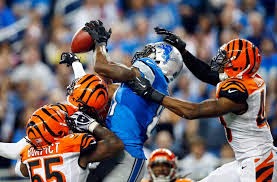 WR:  I’m going to go out on a limb and say that Calvin Johnson won’t finish the season as the top wide receiver in fantasy football; this doesn’t mean that he isn’t the best in real life.  The landscape will be much different this year.  Due to his dominance, Stafford often forced passes to Megatron, sometimes with even three defenders covering him and that led to drives stalling/and or interceptions.  Lombardi’s philosophy has been to emphasize mismatches, often leading to passes thrown to RBs in the flat or exploiting a short DB guarding his huge tight end.  I still believe Johnson will have a monster season, but he won’t be significantly better than the next four or five WRs that are going behind him.

Many expect Golden Tate to be a viable WR option because he moved from a run first team to a pass first team; I advise on tempering those expectations a little bit. The WR2 in both Detroit’s and New Orleans’ systems from years past haven’t received enough targets for players to insert into your Paper Pigskin lineup.  However, Tate is far more dynamic than any of his predecessors and should be able to take advantage of the attention Johnson receives on the opposite side. I probably won’t own him on any of my teams others are grabbing him at his WR31 price.

TE:  It’s really hard to gauge what the team will be doing at this position. Eric Ebron was drafted with a high first round pick to try to emulate what Jimmy Graham does. As talented and athletic as he is, he’s still just a rookie and those that draft him should only do so as a TE2 because of his upside; his ADP is TE18, there are several guys I like better.  Brandon Pettigrew is still on top of the depth chart.  Pettigrew is savvy and knows how to find holes in the defense, but his issues with drops is the reason the team has decided to go in different directions.  He’s not even listed on most ADP databases but should be watched.  For those that still play in touchdown-only leagues, Joseph Fauria is the guy to target. Fauria’s numbers from last season are 30 targets, 18 receptions, and 7 touchdowns; that’s an incredibly high td rate.

Def:  They have one of the top defensive lines in the league but their downfall has been discipline.  Coach Caldwell has a zero tolerance for mental lapses; they have potential to be a top-10 unit this season.