This is a series on my 2014 outlook of players you would want to have on your Paper Pigskin team (fantasy football).  What you'll find here are my views based on years of playing experience and countless hours of geeking out researching stats, trends, and video.  I'll advise where to reach and whose hype not to believe. 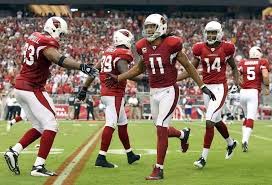 For years, the calling card in the desert has been terrible rushing, and even worse defense. The latter seems to now be under control thanks to Patrick Peterson and friends; the former appears to be making strides, as long as Bruce Arians features the right person. This has the makings of a highly explosive offense.  Arians knows now that he has as many guns as anybody in the West to win a shootout.

QB:  I'll be drafting Carson Palmer as my backup on all my fantasy teams because most people have written him off, he'll likely finish top 10 among QBs in fantasy scoring, barring injury. In the last seven games of 2013, the only quarterback to throw for more yards than Palmer was Payton Manning; only six passers threw for more touchdowns in that same time span.  Palmer has never had a problem with letting it fly, and this offense has a lot of speedsters to go out and get it. Most participants of this Paper Pigskin thing still doubt Palmer and believe the way he closed the year was a fraud. Luckily for you, you're reading this and you know better. 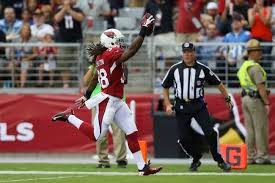 RB:  Andre Ellington will have 400 or more touches in 2014 if we listen to Bruce Arians proclamation that he will receive 25-30 touches per game. Even though I don't believe he will come that close, it doesn't matter as Ellington finished 24th in standard leagues last year in RB scoring with only 10.5 touches per game, averaging 0.8 points per touch.  Simply, Duke Ellington is a the biggest big play guy at this position, letting the horns blow with one of every six carries going for 20+ yards. 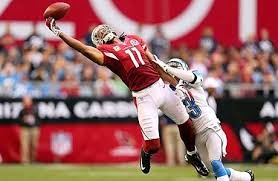 WR:  We're witnessing a changing of the guard in the desert. I'm not saying that Larry Fitzgerald has fell off, although he failed to tally 1,000 yards 2 seasons in a row, but he's owed $23.6 million next season and Arizona is loaded with young talent at the position. Fitz only had two 100 yard games last season. He'll notch at least 80 catches again while working underneath.  I'm cool on him though, much rather let somebody else suffer through failed expectations.  His ADP is WR12, I'm guessing it's due to name recognition or drafters are really expecting a comeback. He will get the defensive attention due to his reputation, while Michael Floyd kills it on the other side.

Floyd is an up-and-coming player in the NFL, and the best may be yet to come. With 65 catches for 1,041 yards and five touchdowns, Floyd ranked as the 23rd-best fantasy receiver in 2013. With more experience as a pro, Floyd could be more productive and finish the season as a top-20 fantasy wide receiver. There's a lot to like; he has the size and speed to be a strong fantasy option. Savvy drafters have already adjusted as he is being drafted as a low end WR1 in some leagues in the 3rd round. He's currently going at WR22. An interesting player has been the rookie, John Brown, word from camp was that he had been tough to cover. He is a speed receiver who is a perfect fit as a slot receiver for Arians' "all-vertical-all-the-time" offense. In the preseason blowout of Houston, he reminded me of TY Hilton. Dynasty owners should have him on their radar, if he wins the #3 spot from Ted Ginn Jr, so should everyone else.

TE:  Throughout the offseason, Arians has been quick to praise the transformation of his tight ends from a year ago, likely because the birds signed John Carlson. Efficiency and reliability are the keys to a tight end in this system. Carlson led Seattle in all the 3 major receiving categories in his first two seasons, and last year made a resurgence in Minnesota. In an offensive system designed for deep balls, Carlson and your Paper Pigskin team can benefit from him being Palmer's safety valve. There's value to be had here, although I wouldn't draft him unless I played in a deeper league. 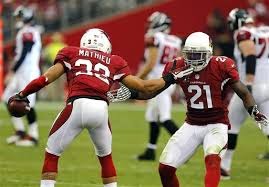 Def:  This is an elite defensive unit, that might be able to improve overall from last season.  The NFL's #1 run defense returns all four starters on their defensive line. Cornerback Antonio Cromartie joins Peterson in the "No Fly Zone". They should definitely be owned.
Posted by Darrel Wilson at 1:34 PM