There is not much offensive talent on this roster that Paper Pigskin players can use to help them reach the promise land. The Giants finished the preseason with a 5-0 record; much of the success should be attributed to the way their defense has played.  A team's defense is often an overlooked factor when evaluating fantasy players; when defenses are good enough to get off the field, it provides more chances for the offense to produce.  New Offensive Coordinator Ben McAdoo was Green Bay's quarterback coach, he emphasizes the short passing game to allow receivers to make plays after the catch. So far, things haven't gone well; the players have struggled and the team has looked out of sync.

QB:  McAdoo has challenged Eli Manning to complete 70% of his throws, which would mean a dramatic 13% improvement from a player that completed 29 of his passes to the other team. The first pass of preseason was an incompletion that should have been caught, he finished that game 6-7 but went 13-30 as the rest of preseason played out.  The plan is for the offense to increase the tempo, a big bump in the sheer number of attempts and completions and you have a recipe for more fantasy points based on volume alone, not including the better efficiency. However, it appears Manning doesn't have the right pieces around him to make this work. The positive here is that the NFC East is full of lousy defenses that can be exploited. Manning can be used as a bye week fill in, well worth the QB21 ADP. 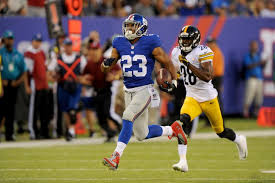 RB:  I feel Rashad Jennings is a fantasy zombie that will come to life in a major way this season.  The Giants' successes in the past have come when the team is able to run the ball well, and it looks like they have the work horse to lean on this season. Tom Coughlin gives the ball to running backs that he can trust, and Jennings is as reliable as they come; he's only lost ONE fumble in 387 career carries. Jennings is a complete back, he can catch the ball well and pick up the blitz, he's also pretty much all they have right now; which bodes well for those who draft him. He's a steal at his RB21 price tag, I'd advise reaching a little higher.  Andre Williams is a stud when he gets the carries, but he'll have a hard time getting in the game if he doesn't learn the nuances of pass protection.  He's likely to only see time in short yardage situations. His ADP is RB46.

WR:  Victor Cruz had a down year mainly because the Giants lacked quality players at the position and were forced to split Cruz out wide more often than they wanted to instead of his more customary placement in the slot. Cruz openly asked management to draft a wide receiver because of this, and they complied by selecting Odell Beckham. The problem has been that the rookie hasn't gotten much time to practice and Reuben Randle and Eli aren't on the same page, which mean Cruz will have to continue to play out wide until these issues get resolved. It's a shame because he's one of the best in the league while running routes down the seam; he'll see many targets regardless though. His WR15 ADP is too pricey for the level the offense is at right now, those that pick him will be banking on steep progression... Randle is a post-catch play maker that is tailor-made for this offense and is the team's best red zone option but is having a hard time grasping the new system that is based on timing and making reads. However, he still has tremendous upside and can pay dividends for those that snag him; not a bad gamble at WR42. Put Beckham on your watch list.

TE:  There's not much going on here other than a lot of question marks, read here for more insight. The key here is to don't draft anyone.


Def:  This is currently the strength of this team but risky to own if the offense can't sustain drives.

Posted by Darrel Wilson at 9:15 AM