Just think of the resurrection of Phillip Rivers' career and the San Diego ball control offense last year to foresee the impact new head coach Ken Whisenhunt can have on this team.  Whisenhunt is a quality coach who can craft an explosive offense.  The Titans have invested a great deal in their offensive line over the past two seasons, including the signing of Michael Oher. There should be better protection for the quarterback and bigger holes for the running backs to run through this season. 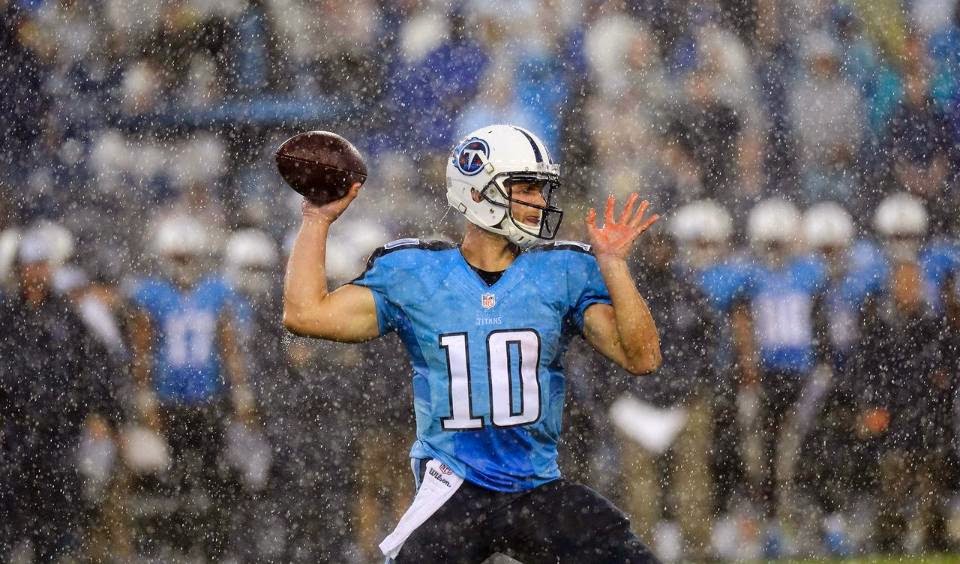 QB:  Jake Locker said he's focusing on accuracy during training camp as head coach Ken Whisenhunt has challenged him in that area. This offensive scheme is predicated on ball control with an emphasis on the short passing game to move the chains with the occasional deep shot to keep the defenses honest. Locker has the shifty receivers at his disposal that can help him take his game to another level. In addition, if things break down, he is mobile enough to move the chains with his feet; a valuable attribute for fantasy quarterbacks. Jake Locker isn't even being drafted enough to register for most fantasy football sites' ADP data. Last summer, most also thought Phillip Rivers was washed up, he finished #6 and he's not mobile at all. Locker has sleeper written all over him. Draft and stash.

RB:  All indications are that Bishop Sankey will be an absolute workhorse for the Titans offense; he is a good pass catching option for Locker. I've seen Shonn Greene play, and I'm not worried about his performance cutting into Sankey's value, although he is #1 on the depth chart for now;  Whisenhunt said that "Greene was the top back because of experience." That doesn't sound like a ringing endorsement. Sankey's ADP of RB22 is a good deal; he's even more valuable in ppr leagues but will probably go sooner. Greene isn't a bad grab with his RB52 price tag, especially since there's always a chance for the rookie to not pan out right away. Dexter McCluster was signed on to be a change the Danny Woodhead pass catching back, this a high standard to reach but surely he has the ability; he's currently going at RB63.

WR:  Kendall Wright's issue has never been talent or skill, it's been usage - and he's going to be used quite a bit this year. Wright topped 1,000 yards in his second season, and now the team’s best receiver will be sent on a wider variety of routes, not just inside slot stuff. Hopefully he sees some end zone targets; only had two last season. He has good value at WR33. Justin Hunter is the name that has been buzzing in the fantasy football circles; at 6'4" and 203 lbs, many are making a comparison to Chicago's Alshon Jeffery, he has massive upside but I wouldn't go that far. Whisenhunt has been known to stretch the field vertically; is he just a go route type of guy though? His goal is to have 60 receptions; if he reaches his goal and approaches his 19.7 ypc clip of last year.  At an ADP of WR52, he's worth a shot late in the draft and would be a steal if all pans out. Nate Washington will still get his, just enough to make Hunter and Wright owners mad but not enough to have on your roster.

TE:  I don't consider Whisenhunt's offensive system to be TE friendly. Players at this position make big plays at times using the stack formation. Some would argue by saying Antonio Gates had a good 2013, I wouldn't disagree but consider it an outlier because of the chemistry that he and his QB had. Delanie Walker will have opportunities for explosive plays but won't be a consistent enough target to be fantasy relevant. Walker's going rate is TE20, which leaves him on the waiver wire to start the season unless you're in a deep league.

Def:  New defensive coordinator Ray Horton has a track record of turning bad defenses into a unit that is tough to move the chains and score on. Tennessee's defense was 10th in fantasy scoring last season. If history is any indication, then this will be one that you want for your fantasy team. Remember that they're in the same division as Jacksonville and Houston.