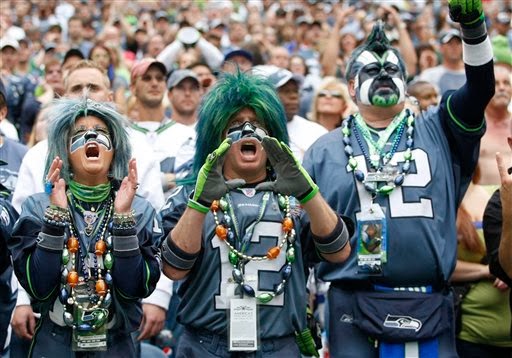 
This team in the Pacific Northwest are the defending Super Bowl because they're all on the same page and make individual sacrifices for the sake of the greater good of the team. Unfortunately Seattle's team goal does nothing for the goals of Paper Pigskin players.  You see, there isn't enough individual production to go around but if you choose wisely, you can come up big in a few areas.

QB: Russell Wilson is truly magical, his passing stats don't jump off the screen at you, yet he's averaged a top 10 finish in his first two seasons; this is with his team running more and passing less than any other team in the league. Wilson rushed for 539 yards and four touchdowns last season. There's room for improvement because there is hope that the staff will open up the playbook more with a healthy Percy Harvin on board.  His preseason numbers were off the charts; he completed 33 of 42 passes for 432 yards and three touchdowns. His ceiling is high as he presents a top-5 upside at his QB14 ADP.

RB:  Marshawn Lynch isn't going to slow down at all, and the team doesn't plan on phasing him out; if they did they wouldn't have given him a raise following his training camp holdout. Beast mode, not known for durability through the early part of his career, has more carries than any running back over the last three seasons. Pete Carroll is going to roll with Lynch until the wheels fall off because he knows there are other running backs in place, that are ready to take over. His ADP is RB6, the only question that needs to be answered if he'll be drafted over the top QB or WR.

Robert Turbin is the true handcuff at this position being that he is 2nd on depth chart. There is will not be a timeshare on this team as long as Lynch is healthy. Therefore neither Turbin or the favorite in fantasy circles, Christine Michael, will have any use until that happens.

WR:  Percy Harvin is highly explosive but haven't been able to stay on the field for a full slate of games  except for once in his career. He also doesn't have any 1,000 yard receiving seasons. However, when he does get on the field, he can produce yards at a high rate in various different ways. He looked to be completely in sync with Russell Wilson during the preseason, so maybe we'll see him top 1,000 this year if he doesn't get injured.  Harvin is highly valuable in leagues that score return yards; in leagues that don't, his WR20 ADP is much too high for his resume and situation.

Part of the reason that I'm slightly down on Harvin is because Doug Baldwin is the true #1 option in the passing game; he's a polished route runner and he can make big plays down the field despite his short stature. He presents much more value than Harvin, especially at his WR56 ADP.

TE: Zach Miller doesn't really have any fantasy value. He's mainly used for blocking but will get the occasional red-zone look.

Def:  This is hands down the best defensive team in real life, and has been known to turn matchups in fantasy football for those drafters that choose them early in their drafts.

Posted by Darrel Wilson at 5:00 AM